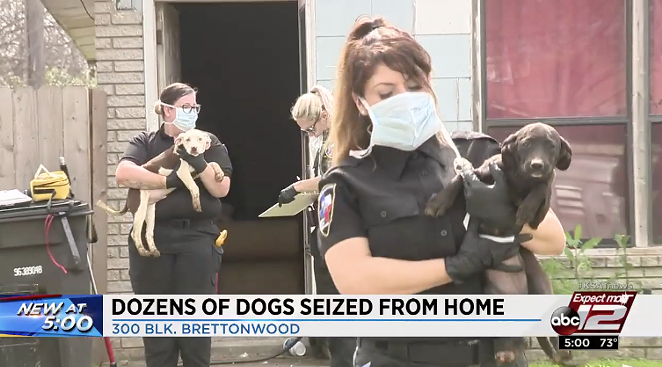 At least 23 animals have been rescued from the woman's house in Northeast San Antonio after neighbors became suspicious of conditions inside and alerted ACS. Lisa Norwood, a spokeswoman for the city-run department, said ACS at first worked with the homeowner to get the residence in compliance with city code and served a warrant at the home on Tuesday.

"It was apparent, just from the animals that we could see on the outside, that there was a large number of animals on the property," Norwood told KSAT.

According to the Express-News, the woman fosters dogs for a rescue organization.

At the home, ACS investigators found dogs old and young, including 15 four-month-old puppies. Norwood said the dogs weren't provided food, water or shelter. She also said conditions were not much better inside the home.

Investigators said a dog was kept in a crate along with suspected remains of a dead canine.

The woman, who has not been identified, was taken into custody on unrelated outstanding warrants, but is facing charges in the matter.