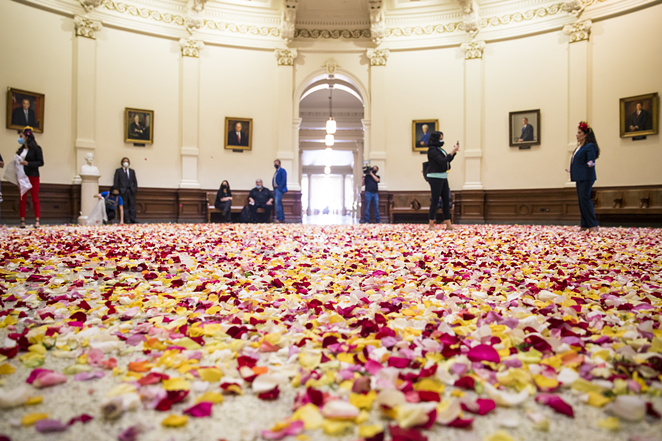 Early Thursday, youth activists spilled some 270,000 rose petals into the Texas Capitol rotunda, symbolizing the number of Texans of color who reach voting age each year.

The middle school-, high school- and college-age activists also scatted the multicolored petals to show the diversity of the state's young voters. Their action took place as Texas lawmakers deliberate on separate House and Senate bills that voting-rights groups say are meant to keep people of color away from the polls.

"In 2020, Texas had one of the largest youth voter turnouts in the county," said Cristina Tzintzún Ramírez, executive director of NextGen America, a progressive group that mobilizes young voters. "Instead of being celebrated, those young voters' voices and votes are being suppressed."

Tzintzún Ramírez's group organized Thursday's protest along with Jolt Action, a nonprofit that works to boost Texas Latinos' civic participation. The organizations are among those fighting House Bill 6 and Senate Bill 7, proposals that are part of a Republican push to enact restrictive voting laws in statehouses across the country.

Tzintzún Ramírez, a former U.S. Senate candidate, said NextGen America spends $50 million to $100 million per election cycle on get-out-the-vote efforts. She warned that activists are prepared for a long-haul battle in Texas if lawmakers enact HB6 and SB7.

"Our message to young voters is don't be afraid," she said. "They're attacking us because they know how powerful we are."