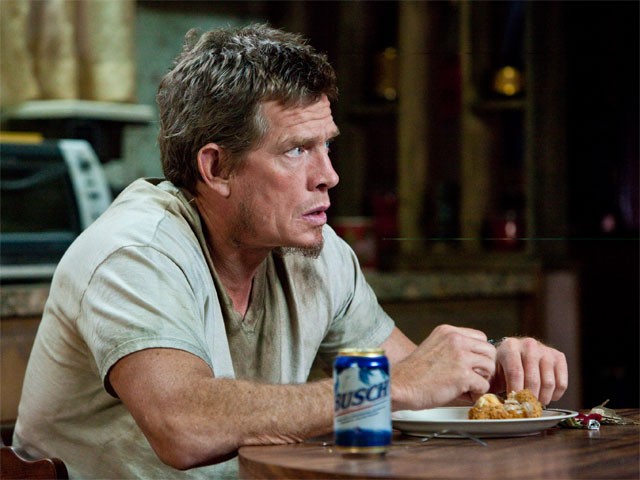 “That’s like saying it’s unhealthy for children to fantasize about unicorns because there’s no such thing as unicorns,” Church, 52, told the Current last week during an interview to promote his new film Killer Joe. “Movies can’t be blamed for children having unrealistic dreams and ambitions.”

Church thinks the debate is an important one to have, but not one that will necessarily produce answers. “I mean, how do I know the guy that did the shooting in Aurora was inspired by movie violence?” Church said. “What inspired the guy at Virginia Tech or the one who gunned down people in a Luby’s Cafeteria in the ’90s?”

In Killer Joe, Church plays Ansel Smith, the spineless patriarch of a Texas family who plots with his son to hire a hit man to kill his son’s mother for insurance money. The film was rated NC-17 by the Motion Picture Association of America for “graphic disturbing content involving violence and sexuality, and a scene of brutality.” The film’s appeal to the MPAA for an R rating was denied.

“I don’t think the sex and the violence are necessarily gratuitous in Killer Joe,” Church said. “But it’s when you throw sex and violence in together when people start to squirm. I just think it was a little too much for the ratings board to figure out and understand.”

Church says it all comes down to a person’s individual value system whether or not they can handle watching something deemed cinematically vulgar. “There are things you will tolerate and things you won’t,” Church said. “I can’t speak for the MPAA, but to me [Killer Joe] is graphic in a very honest way.”

Pointing fingers at the film industry for an increase in violence creates a very slippery slope for other media. Where then will society draw the line since the same issues can be made for music, literature, graphic novels, and cartoons?

“What’s next?” Church asks. “Somewhere down the line some guy is going to blame his wife cheating on him on Fifty Shades of Grey. I just can’t support an argument like that as an absolute truth.”