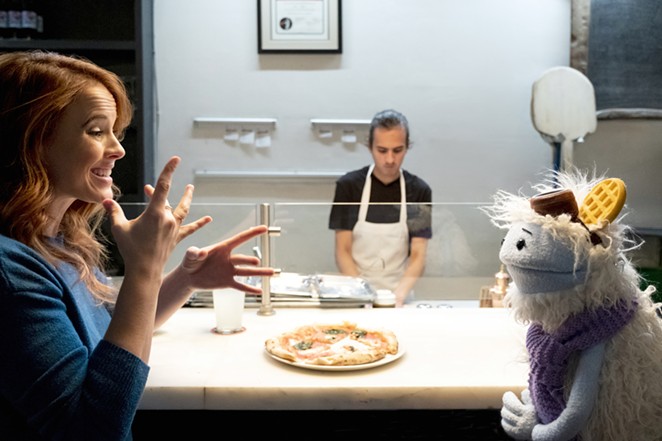 Oscar-nominated actor Stanley Tucci (The Lovely Bones) is getting critical acclaim for his new culinary travel series Stanley Tucci: Searching for Italy on CNN, but he just might have some competition.

Meet Waffles and Mochi, the title puppet characters on the new Netflix children’s series Waffles + Mochi. The show — whose executive producers are Michelle and Barack Obama — follows Waffles, a half-waffle, half-Yeti creature voiced by Michelle Zamora, and Mochi, a Japanese rice cake, as they travel around the world to learn about different cultures, cooking and how to eat healthy.

The first season begins with the episode “Tomato,” where Waffles and Mochi make gazpacho with Chef José Andrés and try to figure out if a tomato is a fruit or vegetable. They also travel to San Francisco to eat pizza at Mozzeria, a restaurant whose employees are all deaf. At Mozzeria, Waffles and Mochi meet up with actress and San Antonio native Katie Leclerc, who communicates with them about pizza and tomato sauce through sign language.

Leclerc, who played a deaf character on the TV series Switched at Birth, learned sign language at the age of 17. At 20, she discovered she had Ménière’s disease, an inner ear disorder that causes hearing loss.

When she was offered a cameo in Waffles + Mochi, she jumped at the chance to have a pair of puppet co-stars.

“I love food, so I thought it was such a cool concept to go around the world and learn about food through culture and hang out with some puppets,” Leclerc told the Current during a recent interview. “The experience was really surreal.”

During the production, Leclerc said she ended up being a “default interpreter” when the other sign-language speakers on set were busy helping someone else.

“I was able to really jump into the production side of things and interpret for the director and the camera operator and work with the staff,” she said. “I just wanted to be of assistance in whatever way I could.”

Leclerc said Waffles + Mochi may help parents get their kids to try new foods and maybe eat a vegetable or two.

“This is a really smart show,” she added. “It’s cool and unique and makes us kind of think like, ‘Maybe I don’t like broccoli like this, but I never thought about trying it this way.’”

Broccoli might be a healthy side dish, but it wouldn’t be on the menu if Leclerc got the chance to travel to a foreign country to explore its cuisine. First on her food-destination travelogue would be South Korea to eat kimchi.

“I really love Asian flavors,” she said. “I’ve had a lot of Korean friends who have helped me over the years, but I love it now. That’s where I would go for food.”

And speaking of Asian flavors, what would Leclerc do if she owned her own adorable pet Mochi?

“Well, I’m a foodie, so I would probably eat it,” she said. “A little caramel with cream and we’re in business!”