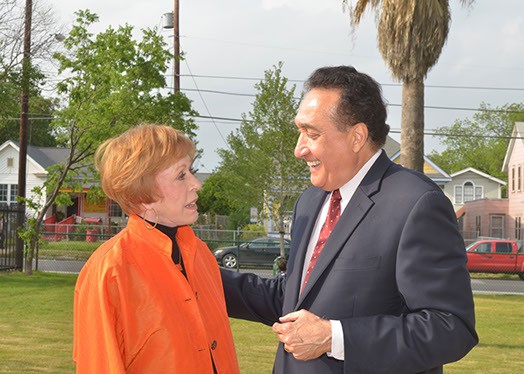 Ahead of a Q&A event in Houston earlier this week, actress and comedian Carol Burnett reflected on her childhood in San Antonio.

During an interview with Houston Chronicle writer Joey Guerra, Burnett shared her fond memories of rollerskating as a young girl in San Antonio.

"I remember we lived in an old house that had seen better days," Burnett, 85, told the Chronicle. "I used to roller skate in front of the house, and the sidewalk was all cracked and buckled. I would fall down and skin my knee, and my grandmother would chase after me with the iodine. I'd run screaming."

Burnett's solution was to start roller skating inside the house. She said she was in San Antonio a few years ago and went to visit her childhood home.

"The skate marks are still there, just grooved into the floor," she said.

Born in 1933, Burnet lived in the home and attended Crockett Elementary until she was seven years old.

"Someone made it from the West Side of San Antonio to a world-wide recognized figure," former Mayor Henry Cisneros told KSAT in 2012. "If that person, Carol Burnett, can do it, they've got a chance if they work and study and prepare."

Cisneros was one of the key figures in turning the home, located at 2006 West Commerce, into a school for underprivileged students learning the English language. The home was originally located at 2803 W. Commerce but was moved to save the structure from demolition as Bill Miller Bar-B-Q wanted to use the space for a parking lot. The barbecue chain ended up buying the home and donating it to American Sunrise, a literacy center founded by Cisneros and his wife Mary Alice.

"They redid it – it just looked beautiful," Burnett said. "And I looked down at the floor, and there were the skate marks."