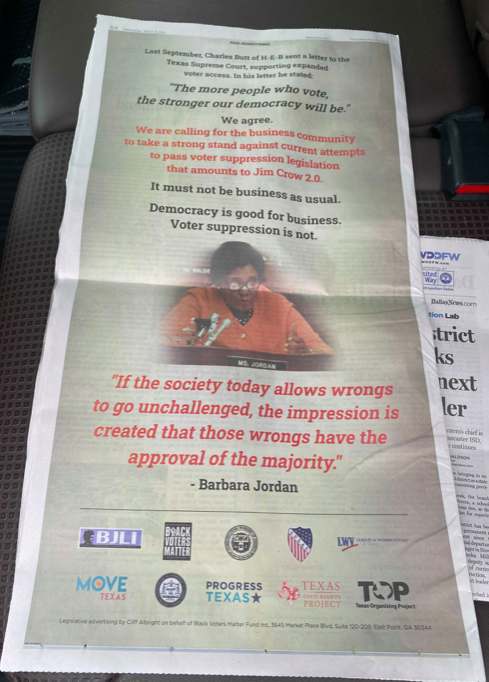 A coalition of 10 Texas progressive groups has run full-page ads in the Houston Chronicle and Dallas Morning News asking business leaders to push back against a restrictive voting bill now in front of the Legislature.

Senate Bill 7 would add numerous additional restrictions to Texas voting laws, already some of the strictest in the nation. Pointing to Texas' long history of voter suppression, voting-rights groups have dubbed the measure, which also has a House companion, "Jim Crow 2.0."

SB7 is one of a spate of bills recently filed in GOP-controlled statehouse that critics argue are intended to keep core Democratic voters, including poor people, young people and people of color away from the polls.

"Last September, Charles Butt of [San Antonio-based grocery chain] H-E-B sent a letter to the Texas Supreme Court supporting expanded voter access," the ad says. "In the letter he stated: 'The more people who vote, the stronger our democracy will be.' We agree."

The ad includes a photo and quote from Texas civil rights icon Barbara Jordan, the first African American woman from the South elected to the U.S. House of Representatives. It calls on businesses to stand up against the pending legislation, backed by Republican Gov. Greg Abbott, saying "Democracy is good for business. Voter suppression is not."


While not spelling out an explicit threat, the tagline hints that the state could see an economic backlash if the Republican-controlled Lege pushes through draconian poll laws. After Georgia passed a similarly restrictive law earlier this week, the MLB Players Association said it may yank the All Star Game out of that state.

Texas would seem to be vulnerable to such backlash since it's playing host to major sporting events such as the NCAA 2022 opening-round tournament in San Antonio and Fort Worth. Final Four championships are also slated for Houston in 2023 and San Antonio in 2025.

“We’re calling on Texas business leaders to do the right thing and hold state lawmakers accountable for their attempts to restrict access to the ballot box for marginalized Texans," said Wesley Story, communications manager for Progress Texas, one of the groups that joined in on the ad. "Voter suppression is bad for business and bad for our democracy. Who wants to be associated with a Jim Crow friendly state?”

San Antonio-based Texas Organizing Project and MOVE Texas are also among the groups that signed on.