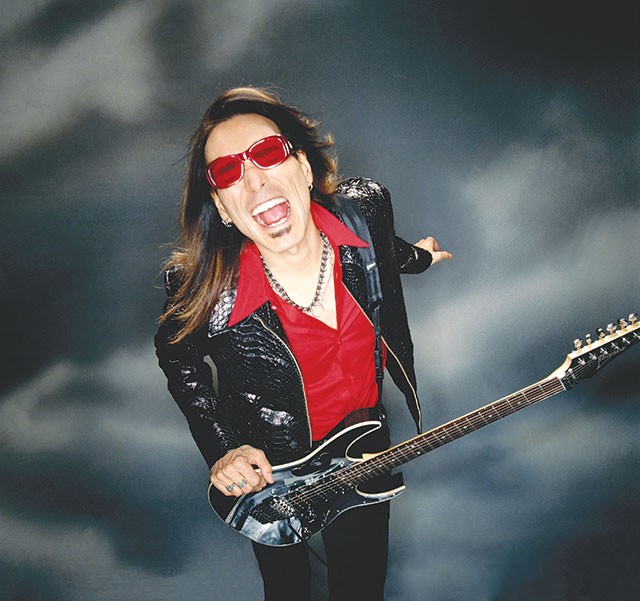 Steve Vai started taking guitar lessons from Joe Satriani at age 14. By the time he was 18, he was transcribing music for Frank Zappa. He impressed Zappa enough to be asked to join the band, record and tour with him, in the process becoming one of the greatest guiatarists of his generation, known for his floating vibrato and, literally, making the guitar “talk.”

“When I see somebody playing, I see the universe expressing itself through people,” Vai told the Current on the phone from Los Angeles. “If somebody picks up an instrument and tries to express himself, even though he can’t even play it very well, I see it as something absolutely beautiful ... You’re listening to God, in a sense, expressing yourself in a multitude of ways. So that’s what I prefer to do nowadays, instead of saying, ‘Wow, they can’t play as fast as me.’”

That doesn’t change the fact that technique needs emotion, and viceversa.

“You need a balance,” Vai said. “If you’re only emotional and don’t have any way of really expressing your visions because you’ve done away with all technical ability, then you’ll destroy your potential to get your ideas … across. And if all you do is intellectual or technical, then your music will have no soul to it.”

On Wednesday, November 20, Vai will be in San Antonio presenting The Story of Light, the second in a trilogy that started with 2005’s Real Illusions: Reflections and will end “sometime in the future.” It is, according to the album’s liner notes, a “multi-layered melange based on the amplified mental exaggerations of a truth-seeking madman who sees the world through his own distorted perceptions.”

“Yes, I’m always looking for less conventional stories and I’m always challenging myself to do something that’s different,” he said. “In the meantime, [until the trilogy and song re-arrangement are complete], it’s just music that can be enjoyed by those who like that kind of stuff.”

The show at Backstage will have it all: a few songs from The Story of Light, career classics, an acoustic set and even a segment in which someone from the audience is invited onstage to “write” a song with Vai and his band. The fan is asked to come up with a drum beat, bass line and melody to be duplicated by the The Story of Light Band: Jeremy Colson on drums, Philip Bynoe on bass and Vai on guitar and vocals (unfortunately, harpist Deborah Henson-Conant is not touring due to scheduling conflicts). “You’ll be surprised to see some of the results,” said Vai. “It’s really amazing.”

It will also be Vai’s first show in San Antonio in a long time, something he doesn’t understand because “I have a great audience there.” But after giving me basic details about the concert, he suggests we look at fan reviews on ticketmaster.com to see what to expect.

“It’s really hard for me to convince people to come to the show,” he said. “When an artist says, ‘Come to my show!’ What does it mean? It doesn’t mean anything.”

Really? He has trouble convincing people to come see him live? I find that hard to believe, especially when he promises a long, long set.

“It’s more effective if [people] hear it from somebody else,” Vai said. “It’s gone as long as three hours, but it’s usually two-and-a-half. Is that long? It doesn’t feel long when you’re watching it, but you’ll have to be the judge of that.”

An Evening with Steve Vai