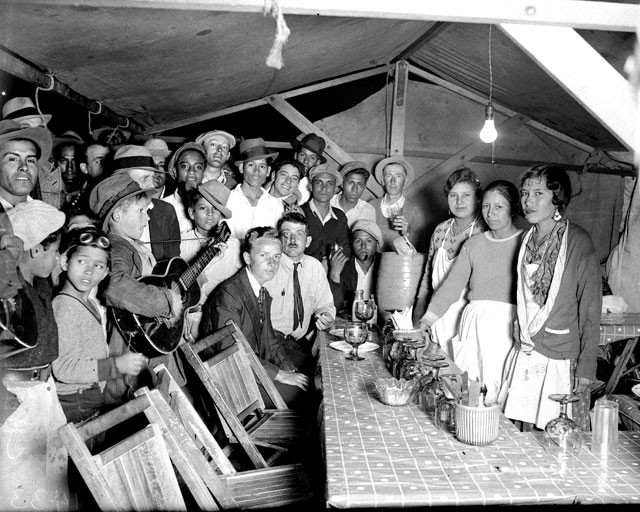 The San Antonio Chili Queens are long gone from Haymarket Plaza, where their tables laden with tamales and steaming tortillas alongside pots of fragrant chili once stood. They were shut down in the late 1930s by a health department that didn’t approve of open-air kitchens. Robb Walsh, author of numerous books on regional cuisine, including The Tex-Mex Cookbook, speculates that the tent in the photo above (taken at San Antonio’s Haymarket Plaza in 1933) was provided by chili fans from one of the local Army posts. For awhile, keeping the cooking under canvas worked, but the Chili Queens and their grand tradition were gone before 1940.

That the Queens’ two-century run began in Military Plaza is appropriate. “Some people claim that women from the Canary Islands came out to the street to sell food to the military,” Walsh said. If so, the Queens were also aptly named, as the first ones would have been the wives and daughters of the city’s alcaldes, or magistrates. They were the settlers induced to leave their Canary Island homes with titles and offices under Spanish colonial rule. Before they arrived, the settlement was held only by the Missions’ Franciscans and Indians — and the Spanish military, of course. The settlers brought their Berber-influenced cuisine with them, especially their fondness for cumin. A new piquant blend of meat mixed with peppers, New World chiles, and other spices became what the world knows as chili. So next time someone tells you that Tex-Mex is a bastarization of good Mexican cuisine, be sure to mention that there’s a little African mixed in, too, thanks to those Islanders.

Discovering and preserving food heritage is part of the mission of the culinary nonprofit Foodways Texas, founded in 2010. Though still in development mode, the group has already established annual events that have brought in foodies from across the state and beyond, including Barbecue Summer Camp, held this June in College Station, and a yearly symposium to discuss the “diverse foodways of Texas.” One of their most ambitious, and no doubt most important, projects is the documenting of oral histories related to how foods have been grown, prepared, and enjoyed. Based in Austin, where they offer frequent events, Foodways Texas has also established a presence here in San Antonio through a burgeoning relationship with the Pearl. For more information, visit foodwaystexas.com.