After a Winning First Half, ‘Fury’ Loses to Cliché 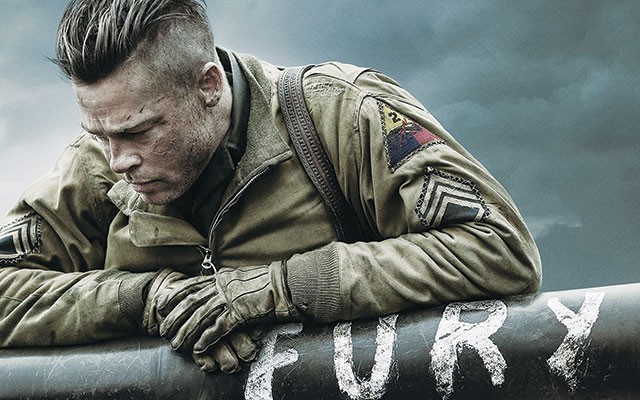 It’s curious that Brad Pitt stars in Fury in the wake of Inglourious Basterds, Quentin Tarantino’s irreverent bullet to the head of the WWII action-drama form. After playing the charismatic Nazi-killer Aldo Raine in the ’09 revisionist Tarantino joint, it’s hard to reimagine Pitt in a WWII flick after Basterds, let alone a straight-ahead fiction of WWII heroics.

So it’s even more curious that both Pitt and Fury deliver through most of the 134-minute interpretation of the final throes of WWII. Fury, written and directed by David Ayer (Training Day, U-571), opens in April of 1945 with a tank of five fighting for every inch on the way to Berlin.

From the opening, it’s a bleak affair. With stifling shots of life and death inside the tank of Don “Wardaddy” Collier (Brad Pitt), Ayer makes real the high tension and claustrophobic hell of living in a cold, steel death machine.

With a crewmember dead, Collier and his weary crew of Michael Peña (Crash, American Hustle), Jon Bernthal (Walking Dead) and Shia LaBouef are forced to pick up the combative slack and storytelling trope of novice Logan Lerman (Noah, Percy Jackson). Though the stale rookie/veteran dynamic repeats on loop in the war genre, Pitt and Lerman invest emotion in the relationship, particularly in a long and poignant pause from the action at the halfway mark.

In this long, domestic break from war, Pitt and Lerman find themselves in an apartment of hiding Germans, a scene that subtly avoids expectations and makes dynamic changes in energy. In English and fluent German (his language skills have certainly improved since Basterds), Pitt shows the full range of his character, a scarred and violent man who knows the power of compassion. Lerman, not yet a marquee name, manages to hold his own.

After the intermission, Ayers’ tight plot begins to unwind. In the first half, Fury’s individual performances manage to keep the plot rolling, but as we enter the final battle, clichés whir past as often as bullets. The final stand is a bit far-fetched and a redemptive act of compassion between soldiers contradicts Fury’s dark and violent tone.

If historic fiction tells us more about the present than the time depicted, Fury’s statement is that war—post-Basterds, post-Iraq II—is an amoral, unyielding and brutal business. From his chaotic system, we still crave a traditional hero and a sense of meaning, though both have long faded from reality. That, and explosions.