February 21, 2014
comment
During a Senate Health Committee hearing at the Capitol yesterday (made available via livestream) that partially focused on the progress of women's health in Texas, a leading Republican overshadowed the crippling impact legislative budget cuts and restrictive laws have placed on the reproductive health network by offering up praise for Texas' investment in women's health programs. 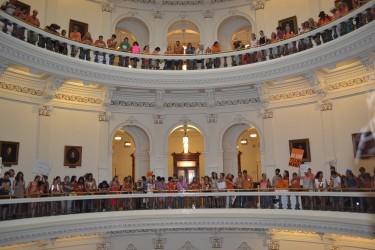 Chair state Sen. Jane Nelson (R-Flower Mound) called the argument that women no longer have access to reproductive health care a "misinterpretation," and painted a picture of the state's women's health landscape that some Democrats, health professionals and advocacy leaders say is far from reality.

"I realize that 2011 was a difficult budget year and reductions in family planning had an impact on access to services," said Nelson. "But we also made significant investments and significant progress since then. I still see so much misleading data being circulated to Texas women. So, one of the things I want to do today is set the record straight."

While the Lege infused family planning funds (through primary care, not speciality clinics, another possibly problematic issue altogether) with $100 million in the 2013 legislative session, the money is largely seen as a replenishment of funds that only goes so far to restore the massive cuts made in the recent past. In 2011, the GOP-controlled Legislature cut family planning by $74 million in a move meant to punish abortion-affiliated clinics, resulting in 76 clinic closures to date and widespread reduction in services. And that's aside from the estimated 12 abortion clinics that have shuttered their doors due to the state's new abortion law.

They also excluded Planned Parenthood from a Medicaid program that offers preventative care (like cancer screenings and birth control), denying 50,000 women their choice provider. After booting PP (the dominant provider) out of the program, the new Texas-run version sees nearly 80 percent less clients than before. In 2011, the state helped serve 203,000 low-income women, but by 2013 less than 48,000 women saw assistance.

“It’s unfortunate that the same politicians that have devastated Texas women’s access to basic health care like cancer screenings and birth control are now touting their so-called achievements in women’s health," said Ken Lambrecht, CEO of Planned Parenthood of Greater Texas, in a statement. "If that’s what they call help for Texas women, we’ve had quite enough of it."

Overall, an estimated 155,000 women have lost basic reproductive health care since 2011. Health researchers concluded that the state is witnessing a "dismantling of a safety net that took decades to build and could not easily be recreated even if funding were restored soon."

In light of the devastating impact the lege has inflicted upon women's health, Amy Kamp, a former PP and Women's Health Program patient thought the hearing bordered on comedic travesty: “When I heard about the hearing — well, I felt like if the Daily Show was going to create a parody, they couldn’t have done a better job," Kamp said in a statement. "If Texas wants to protect women’s health, I have a helpful suggestion. Just reinstate the old program we used to have!”