After Condemning Trump's Earlier Tweets as Racist, Will Hurd Declines to Do the Same for President's Twitter Attacks Against Baltimore 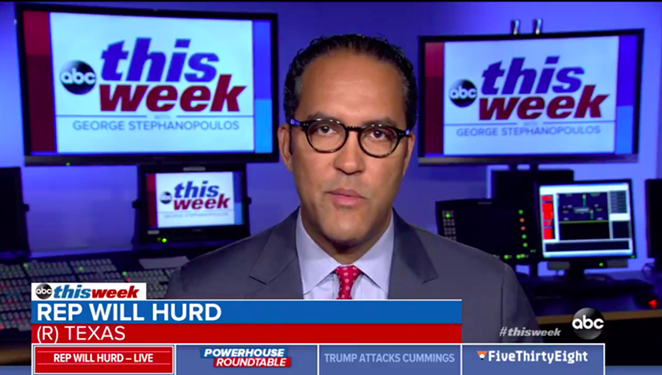 Republican Congressman Will Hurd, who this month condemned President Trump for a series of racist tweets, has refused to apply that label to the president's Twitter tirade against U.S. Rep. Elijah Cummings and the city of Baltimore.

On a weekend ABC News appearance, Hurd said Trump's attacks on Cummings, an African American Democrat, were "different" from those where the president told four congressmen of color to "go back" to their countries of origin. Hurd, who represents San Antonio and a stretch of the U.S.-Mexico border, was one of only four congressional Republicans to support a resolution condemning the earlier tweets.

ABC's George Stephanopoulos asked Hurd why he drew a distinction between Trump's online outbursts. On Saturday, the president called Cummings a "brutal bully" on Twitter and described Baltimore, which the congressman represents, as "a disgusting, rat and rodent infested mess."

"But to focus on an entire city, calling it 'rat and rodent infested,' you see no problem with that?" the anchor pressed.

"Well of course, he shouldn’t," Hurd replied. "You know, I don’t think they’re going to invite him to throw out the first pitch at a baseball game anytime soon."

During the interview, Hurd also told Stephanopoulos he continues to support Trump’s reelection.

"My plan is to support the Republican nominee," Hurd added.

Hurd faces a 2020 challenge from Democrat Gina Ortiz Jones, who ran a close midterm contest to unseat him. Activist Rosey Ramos Abuabara and journalist Liz Wahl are also pursuing the Democratic nomination to represent the district.