After drastic changes made behind closed doors, and an overnight debate, Texas Senate approves voting bill 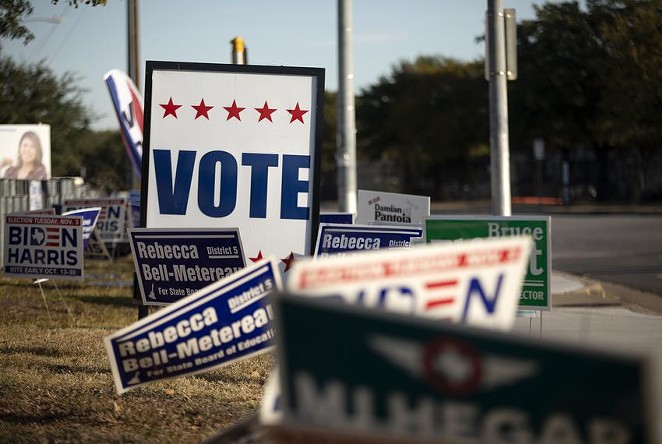 In the course of several hours Saturday and early Sunday, Senate Republicans hurtled to move forward on a sweeping voting bill negotiated behind closed doors where it doubled in length and grew to include voting law changes that weren’t previously considered.

Over Democrats’ objections, they suspended the chamber’s own rules to narrow the window lawmakers had to review the new massive piece of legislation before giving it final approval ahead of the end of Monday's end to the legislative session. This culminated in an overnight debate and party line vote early Sunday to sign off on a raft of new voting restrictions and changes to elections and get it one step closer to the governor’s desk.

Senate Bill 7, the GOP’s priority voting bill, emerged Saturday from a conference committee as an expansive bill that would touch nearly the entire voting process, including provisions to limit early voting hours, curtail local voting options and further tighten voting-by-mail, among several other provisions. It was negotiated behind closed doors over the last week after the House and Senate passed significantly different versions of the legislation and pulled from each chamber’s version of the bill. The bill also came back with a series of additional voting rule changes, including a new ID requirement for mail-in ballots, that weren’t part of previous debates on the bill.

But instead of giving senators the 24 hours required under the chamber’s rules to go over the committee’s report, including those new additions, state Sen. Bryan Hughes, R-Mineola, moved to ignore that mandate so the Senate could debate and eventually vote on the final version of the bill just hours after it was filed.

Around 6 p.m. Saturday, Hughes acknowledged the Senate would consider the report “earlier than usual” but tried to argue he was giving senators "more time" by alerting them about his plan to debate the final version of SB 7 at 10 p.m.

The Legislature is up against a Sunday night deadline to approve conference committee reports, like the compromise version of SB 7. Had the Senate waited until later Sunday to consider it, it could have left it in reach of a filibuster that could’ve killed the bill. The House is expected to vote on the final version of the bill later today.

Senate Democrats raised concerns that they had not had sufficient time to review the 180-page conference committee report, including a 67-page bill and a lengthy analysis of the negotiated changes. Roughly 12 pages of the bill contained additions that hadn’t been previously considered as part of the legislation and were added by the committee out of the public eye. The truncated schedule also left them without the opportunity to check in with local election officials in their districts or voting rights groups monitoring its passage, they said.

After Senate Republicans voted to suspend the rules, Hughes opened debate on a resolution to approve those 12 pages of additional changes, with Democrats questioning the origin of those changes and the lack of public input in tacking them onto the bill.

“I couldn’t in good faith vote to pass a bill the size of this one, that will affect the voting rights of every single Texan of voting age, when they’ve been deprived of the opportunity to voice their opinions on the final package of this bill," state Sen. Beverly Powell, D-Burleson, said.

Throughout the debate, Hughes argued SB 7 was striving for “common sense” solutions that secured elections from wrongdoing and fraud.

“We want elections to be secure and accessible,” he said.

Defending the additions as a standard part of the conference committee process, Hughes argued many of the additions were pulled from other bills passed by the Senate or generally discussed by the chamber.

The new provisions include language from separate Republican bills that failed to pass that would set a new voter ID rule for mail-in ballots, requiring voters to provide their driver’s license number or the last four digits of their Social Security number, if they have one, on their applications for those ballots. For their votes to be counted, voters will be required to include matching information on the envelopes used to return their ballots.

Other changes, including a new window of 1 to 9 p.m. for early voting on Sundays, hadn’t come up until they were added to the conference committee report outside of public view. State Sen. Royce West, D-Dallas, raised the possibility that change could hamper “souls to the polls” efforts meant to turn out voters after church services and questioned the justification for 1 p.m. start time.

“Those election workers want to go to church, too,” Hughes responded.

When West asked if Hughes had spoken to election workers to make that determination, Hughes admitted he hadn’t.

Beyond the debate over the new changes, the Senate’s discussion on SB 7 regularly landed on the detrimental effect Democrats feared the legislation would have on voters of color and the significant portions of the bill that were written to outlaw some of the voting initiatives Harris County used in the last election.

SB 7 would ban drive-thru voting and the day of 24 hours of uninterrupted early voting the county offered — both of which proved particularly successful in reaching voters of color. An analysis by Harris County’s election office estimated that Black and Hispanic voters cast more than half of the votes counted both at drive-thru sites and during extended hours.

“The provisions of this bill apply equally across the board,” Hughes said in response to Democrats’ questions about the bill’s effect on access for voters of color. He added that the provisions banning those voting initiatives could only target Harris County because it was the only county he was aware of that offered those options.

He also pointed out that the final version of SB 7 left out a provision to regulate the distribution of polling places only in the state's largest counties — diverse, urban counties largely under Democratic control. A Texas Tribune analysis found the formula proposed by Hughes would have led to a significant drop in voting sites in largely Democratic areas, with voting options curtailed most in areas with higher shares of voters of color.

Hughes said the decision to leave out that provision had been influenced by the Senate’s initial debate on SB 7 when Democrats hammered the Republican over that proposal. But state Sen. Borris Miles, a Houston Democrat, pressed him on whether he had adequately considered the extent to which SB 7 could narrow access for voters of color, pointing to Hughes’ decision to keep the ban on drive-thru voting despite the concerns Democrats raised about that provision.

“Because I represent a majority African American district and we benefited from the drive-thru voting that you’re trying to ban now, I feel like you’re coming for my district,” Miles said.