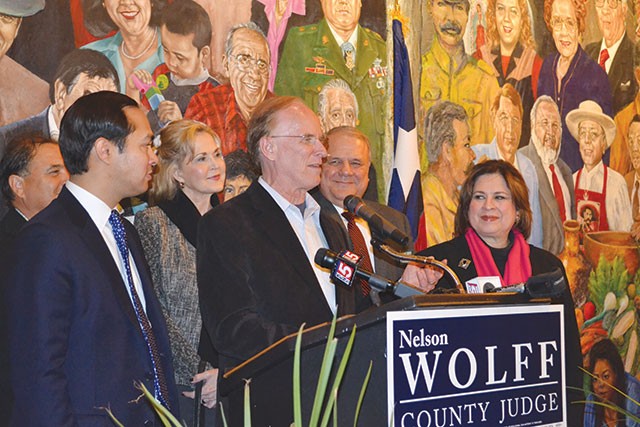 Cadillac Bar was abuzz with election night fervor on Tuesday, March 4. The Bexar County Democratic Party took over the Downtown watering hole to celebrate wins, await totals and get down on the dance floor.

“It’s an exciting time for us; there are more local Democratic candidates running today than ever before,” Chair Manuel Medina tells the Current. “With strong leadership like Wendy Davis and Leticia Van de Putte—from our hometown—at the top of the ticket and David Alameel going for the Senate, we’ve been able to translate that enthusiasm at the grassroots level.”

On the statewide level, incumbent Lt. Gov. David Dewhurst trailed state Sen. Dan Patrick, a religious conservative from Houston (Dewhurst polled at 27 percent statewide and 32 percent in Bexar county compared to Patrick’s 43 and 47 percent, respectively) in a show of Tea Party voting force, but garnered just enough votes to pit the two men against each other in what will be a very heated GOP primary runoff come May.

And watch out for these other GOP runoffs: former state reps Sid Miller vs. Tommy Merritt for ag commissioner; former state rep Wayne Christian vs. Ryan Sitton for railroad commissioner and Francisco “Quico” Canseco vs. Will Hurd for U.S. House District 23.

“I don’t know if I’ve ever seen a shuffle like this from the top of the ticket down,” he says. “When [Gov.] Perry decided not to run, it created a floodgate of opportunity for candidates to move up the ladder.”

On the Democrat side, David Alameel and Kesha Rogers (who splashed national headlines for her not-so-popular call to impeach President Obama) go toe-to-toe in May and cigar-chewing, pro-pot Kinky Friedman takes on Jim Hogan for agriculture commish.

At one point, it looked like state Sen. Donna Campbell (R-New Braunfels) would likely see a runoff against former District 9 City Council member Elisa Chan, but the Tea Party darling narrowly took the lead with 54 percent of the vote and evaded another conservative showdown. (By the way, Chan, most famous for her ignorant anti-LGBT remarks scored 27 percent in the Bexar County Republican primary, so there’s that.)

But other races weren’t so smooth.

Oscillating voting numbers had Bexar County District Attorney Democratic candidates Nicholas “Nico” La Hood and Therese Huntzinger at the edge of their seats. In the end, La Hood beat his newly minted Dem opponent by a razor thin 50 votes or 50.06 to 49.94. Now, unless provisional ballots still to be counted at press time change the narrow margin, La Hood faces long-time incumbent Republican Susan Reed in the general, a redux of the 2010 race, where he lost out to Reed by seven percentage points.

A handful of local races ended up in runoffs—most notably, County Commissioner Precinct 4, which yielded both a Dem and GOP runoff. On the left, SAISD board trustee Democrat Debra Guerrero and Eastside organizer Tommy Calvert attracted nearly equivalent vote totals, separated by just one percentage point (we’re talking 25 versus 26 percent) in the open spot made available by Tommy Adkisson’s bid to unseat Wolff. However, securing a victory for Guerrero may be an uphill battle—the former SA city council member was embroiled in allegations that she got too close for comfort with architecture firm Kell Muñoz while the company was contracting with the City. On the other end, the GOP runoff sees two mayors—Timothy Wilson of Kirby and Alan Baxter of Windcrest—fight it out this May.

Expectedly, voter turnout was paltry; just 109,430 out of 916,408 registered Bexar County voters showed up at the polls for the primaries, netting a voter turnout of less than 12 percent (a slight decrease from the last gubernatorial primary). And the GOP presence outshined the Dems, taking 59 percent of total votes to 40 percent of Democrats.

When are the runoffs?

Can I vote in the runoff election?

Why do runoffs occur?

In Texas, if no candidate wins 50 percent of the vote, the two candidates with the highest vote totals must go head-to-head to duke it out one more time.

Where can I find more runoff voting information?

Elections.bexar.org (note: the May 27 runoff election is different than the May 10 election, which covers city and school board offices).