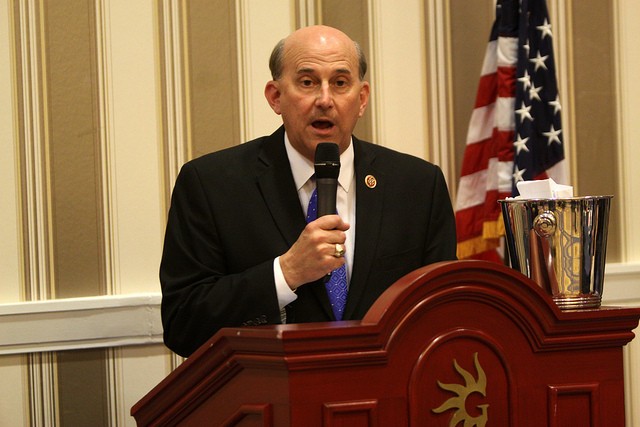 Ready for some mask schadenfreude?

U.S. Rep. Louie Gohmert, the Texas Tea Partier who made it a point of pride not to wear a mask during the pandemic, has now tested positive for COVID-19, Politico reports.

The Tyler Republican was scheduled to jet back to the Lone Star State Wednesday for an appearance with President Donald Trump. That is until a White House pre-screening kept him off the flight.

But that ain't all, folks.

Gohmert attended Tuesday's Capitol Hill grilling of Attorney General William Barr, and the two were spotted exchanging words in close proximity — both sans mask — according to Olivia Beavers, a reporter for online news site The Hill.

ACTUALLY... here is a video of AG Barr and Gohmert.

While Barr arrived with a mask, it was off when he walked into the hearing room, so both men were not wearing masks at this time. pic.twitter.com/xm6wuq6QvW


Ever the conscientious boss, Gohmert also dropped by his office to personally let his staff know he'd tested positive, according to ABC News investigative reporter Katherine Faulder. Gee, thanks, boss!

Just want to emphasize -- Rep. Gohmert returned to his Capitol Hill office & told staff he wanted to inform them *in person* instead of finding out from news reports. Some staffers were already in the process of leaving as Gohmert came back, I'm told. https://t.co/Aie1K2jPAc


Of course, Gohmert told CNN in June he wasn't donning no stinking mask because he gets tested regularly for the coronavirus.

By now, you probably know not to attempt that at home, kids. The Centers for Disease Control and Prevention recommends that people wear face masks in public — whether they've tested positive or negative.

But denying science has become a Gohmert trademark. After all, this is the guy who once said climate change is good because it would help the plants grow and supported construction of an Alaska pipeline to enhance the sex lives of caribou.

"I don't have the coronavirus, turns out as of yesterday I've never had it," the eight-term congressman told CNN back in June. "But if I get it, you'll never see me without a mask."

Well, now's your chance to strap that puppy on, Louie.