After the Fair's Over: The “Redemption Story” of HemisFair Park

In 1968, San Antonio began a transformation from being a dusty little South Texas town to the growing metropolis we know it as today. Some might argue that year was the most pivotal for the Alamo city — Tom Frost (of Frost Bank), once told the San Antonio Express-News, “The most important date in San Antonio’s history isn’t the fall of the Alamo or the date we were founded, but April 6, 1968” (the day the World’s Fair opened in San Antonio).

Before 1968, San Antonio wasn’t quite on anybody’s radar. Overshadowed by Houston and Dallas, with perhaps the occasional shout-out in a traveling cowboy’s song, the city was thought of as a backwater town. The River Walk wasn’t yet developed, the tourism industry wasn’t well-established and the Spurs weren’t yet a thing. But all of that changed when the World’s Fair, known as HemisFair ‘68, took over the city for six months, from April to October.

In the early 1960s, a group of San Antonians decided they were going to host a World’s Fair, without a clue about where it would be, what it would be like or how they would pay for it.

“You’ve got all these people who show up and decide they’re gonna have a World’s Fair in San Antonio, which is just crazy. And the craziest thing is, they actually get it done,” Drew Hicks, a spokesperson for the Hemisfair Park Area Redevelopment Corporation, told the Current.

The ad-hoc group included San Antonio Congressman Henry B. González, who endorsed the idea of the fair, and had only become the first Mexican American elected to the U.S. House in 1961. Others were Bill Sinkin, the first president of San Antonio Fair, Inc., Texas Governor John Connally, Henry B. Zachary, San Antonio Mayor Walter McAllister and Red McCombs, to name a few.

By 1964, San Antonio had won the right to host the World’s Fair four years later. It was decided that the best place to host the event would be in the 92 acres of a downtown neighborhood then referred to as “Germantown.”
But there was one problem: The 92 acres chosen were already occupied by a thriving community of German, Polish, Mexican and African-American residents, as well as their streets, churches and homes. The city bought up the land using eminent domain, forcefully evicting all residents and their surrounding community.

“A lot of those people left, they took the cash, and the City of San Antonio helped find them new housing, and they left and that was OK. But there were literally people that had to be dragged out of their homes,” Hicks said.
“It’s a story that our city, collectively, we’ve not been super comfortable talking about, and as we’ve gone through the development of Hemisfair, I think that it’s critical that we tell the story of that time. And that we remember that that happened. I don’t think it benefits us in any way to shy away from that story,” Hicks said. 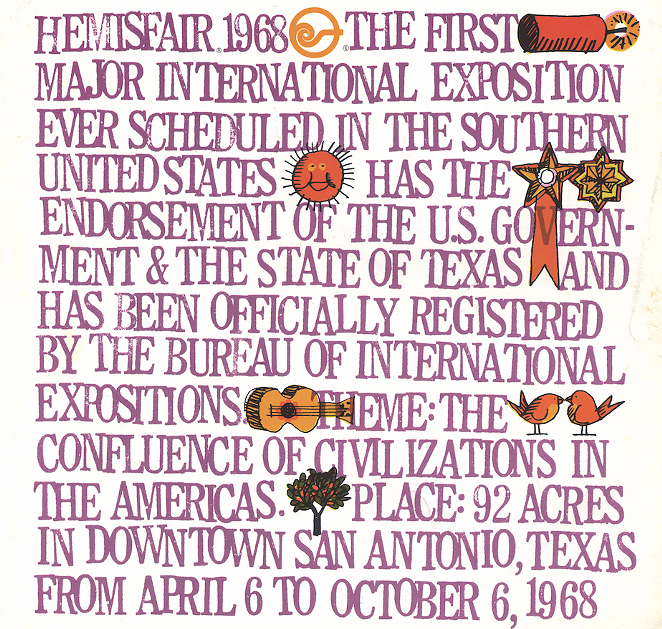 “1968 was a year right out of hell. There were so many hideous, tragic things that happened that stained our country,” former First Lady Lady Bird Johnson once said in a HemisFair documentary for KLRN.
The country was at war with Vietnam, and then-President Lyndon B. Johnson had just announced he wouldn’t be seeking a second term. Civil rights advocates were still fighting daily to end racial segregation. Then, less than 48 hours before the fair was set to open, Dr. Martin Luther King Jr. was assassinated. President Johnson, who was supposed to be at the opening day of HemisFair, stayed in D.C., but Lady Bird came in his stead. (Johnson eventually rescheduled his trip to the fair for July 4.)

“Despite all the conflicts, civil unrest … everything negative about our world at that time was really being unleashed, but everybody I’ve talked to has had pretty much the same thing to say about HemisFair: When they came in these gates, all of that pretty much went away. You could kind of walk into a microcosm of a world that was free from conflict and disagreement,” said Christopher Medina, a HemisFair historian, who has single-handedly collected more than 1000 pieces of memorabilia from the event.

“Restaurants were segregated. Blacks couldn’t go into restaurants. [The executive board] went up and down Broadway and said, you’ve gotta get with the times. They were quite successful in that effort,” said Marlene Richardson, the former executive producer of KLRN who produced the HemisFair documentary.

Once you walked in the fair, there was no shortage of sights to behold: There were sculptures everywhere, a Swiss skyride, gondolas, a mini monorail, and troupes of entertainers who would break out into random acts in front of crowds waiting in lines. More than 30 international pavilions with unique architectural styles allowed visitors to immerse themselves in the cultures of countries like Belgium, France, Italy, Japan, Mexico and China.

Perhaps the most popular attraction was a group of Native Mexicans called “Los Voladores de Papantla,” who would climb atop a 135-foot-high steel pole that was only 13 centimeters wide. One man would dance and play the flute while standing at the very top of the pole, and four others, who were tied to the pole with only a rope around one of their ankles, would unwind, flying around the pole the way theme park swings do, until they reached the ground again. Part of the Voladores’ show included a ceremony with a “bare-breasted maiden” they would act as though they were sacrificing.

“When word got out that there was going to be a bare-breasted maiden, that was quite the show. One of the guys who worked with me, he was 7 or 9 at the time of the fair, his mother covered his eyes,” Richardson said.
In the six months the fair operated, approximately 7 million visitors came to see it.

“It was just an occasion to say, ‘World, here we are! And we are special, and we are different,’” Lady Bird Johnson told KLRN on the 20th anniversary of the fair. “It was romantic, picturesque. Everybody, a Texan, from wherever, felt that San Antonio was a piece of his life. I think it was just the right town for that to happen.” 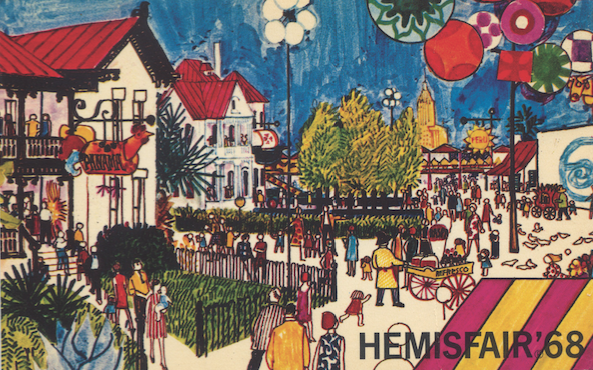 Today, Hemisfair (which styles its name with a lower-case “F”) operates primarily as a public park, with a few of the structures built for the ‘68 fair still being used. The former United States Pavilion is now the San Antonio Federal Courthouse, and the Texas Pavilion is the Institute of Texan Cultures. The Tower of the Americas, which was built for HemisFair ‘68, still operates daily, and the former Mexican Pavilion is currently operating as the Mexican Cultural Institute.

But for decades after the fair wrapped up, the majority of the structures and land at Hemisfair Park went unused. Some structures became home to feral cats, some had standing water, others began rotting and falling apart. Despite the way the fair propelled the revitalization of the River Walk, and how it’s been credited for putting San Antonio on the map, the 92 acres kind of sat there, largely inaccessible and underused, for decades.

Only recently have city officials and developers turned their gaze to the park: In 2010, then-Mayor Julián Castro developed the huge urban development plan known as SA2020, in which the crown jewel would be Hemisfair. In 2015, Yanaguana Garden in Hemisfair opened to the public, featuring more than four acres for children to play in the splash pads, new playground, or with life-size checkers and chess boards. There’s also a new paletería, coffee shop and restaurant. Next, the Hemisfair Park Area Redevelopment Corporation plans to expand the park area using more Hemisfair acreage. Eventually, the park will also have housing (including allotted affordable housing) and more local businesses. And all of it goes back to the ‘68 fair.

“I think if you would’ve written about Hemisfair 10 years ago, it would’ve been a tragedy,” Hicks said. “I think today, it’s a redemption story.”