After Tour, Rep. Castro And Other Dems Call To Close Family Detention Centers 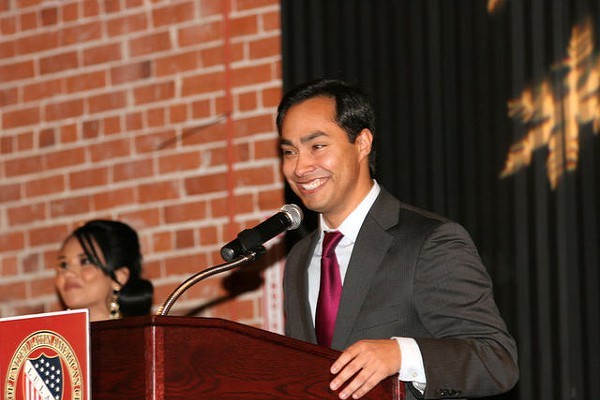 As reports of detainee mistreatment trickle out of immigrant detention centers in South Texas, Rep. Joaquin Castro, D-San Antonio, hosted a delegation of concerned members of Congress to visit the facilities.

Castro and seven other Democratic lawmakers toured the Karnes County Residential Center on Monday, an Immigration and Customs Enforcement family detention center south of San Antonio. They will tour the South Texas Family Residential Center in Dilley on Tuesday.

Members of the delegation said they had nearly unfettered access to the facility, conducting several individual interviews with detainees.

Castro called it a “very emotional visit.” He said that many of the detainees — some of whom have spent a year or more in the facility — should qualify as asylees, most of whom have fled violence, persecution and abuse in Central America.

“What I saw today did nothing but confirm my belief walking through the door that we should end the jailing of women and children in these proceedings. It is by its nature punitive, whether it is intended to be or not,” said Rep. Zoe Lofgren, D-Calif. Lofgren is the ranking member on the House Immigration and Border Security Subcommittee.

The congressional visit comes on the heels of one detainee — Lilian Oliva Bardales, a 19-year-old Honduran mother of one — attempting suicide, according to McClatchy.

Over 130 House Democrats, including Castro, sent a letter in late May to Homeland Security Secretary Jeh Johnson asking him to end the department’s use of family detention facilities.

The letter cited concerns over “troublesome conditions of confinement, due process issues, and serious developmental and medical concerns” at the “jail-like facilities.”

Their tour of the Karnes County facility only bolstered those impressions.

“They are in a locked facility that feels quite a bit like a jail. I would say it is a jail camp. The children are experiencing various forms of distress, and it is very difficult for lawyers to get out to this facility,” Lofgren said.

Some of the women in the Karnes facility reported being held in solitary confinement, Lofgren said.

Johnson toured the Karnes County facility last week, but there’s been no word on his takeaways from the visit. He and other DHS officials released a series of reforms in May, including the creation of a health advisory committee and a full review of residential facility policies.

Several members who visited the facilities said they plan to meet with Johnson to compare notes and discuss alternative methods for housing these refugees.

Supporters of these facilities argue they’re the best way to keep families together to ensure they show up for court hearings. But the Democrats at the press conference refuted that on Monday, suggesting instead that the private prison industry is driving the policy of incarcerating women and children seeking asylum.

For-profit prison companies — The GEO Group and Corrections Corporation of America, respectively — have contracts with ICE to manage both the Karnes and Dilley facilities.

“I believe — not conspicuously and openly — but the private prison system drives these numbers,” said Rep. Sheila Jackson Lee, D-Houston. “I am not against people’s jobs. But I do believe that the economic aspect of private prisons should not drive the humanitarian needs of women who are seeking asylum and are seeking refuge.”