Ken Paxton Fights the EPA Over Bexar's Non-Attainment Designation Because... (You Guessed It) 'Overreach' 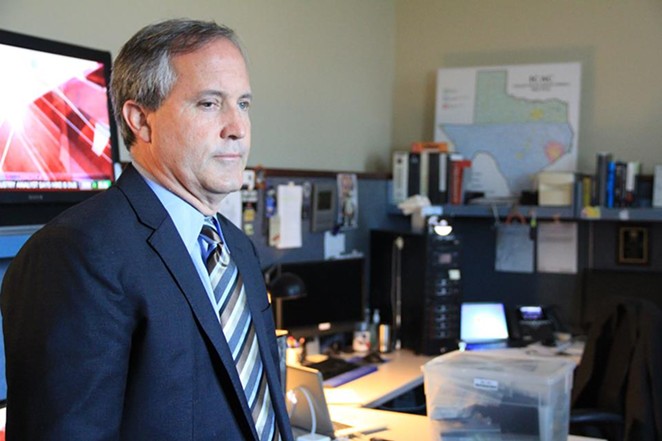 His petition in the U.S. Court of Appeals for the Fifth Circuit requests that the court review the EPA move to further restrict smog-causing ozone in the San Antonio area. Among other things, the federal rules for "non-attainment" cities put the brakes on highway construction and some factory expansions.

“We are continually and successfully reducing ambient ozone concentrations without stifling economic or population growth, and we will continue to do so without the EPA’s overreaching regulations,” Paxton said in a written statement.

But environmental groups said the AG's filing isn't much more than posturing — or a legal Hail Mary. After all, he and his boss, Gov. Greg Abbott, have already made numerous attempts to slow the non-attainment train that's chugged toward us in slow motion over the past two decades.

"Saying that the Trump administration, one of the most deregulatory administrations we've ever seen, is overreaching on this issue is laughable," said Luke Metzger, executive director of Environment Texas.

For example, Gov. Greg Abbott — Paxton's boss — last year issued a line-item veto slicing away $1.5 million in funding to help the Alamo Area Council of Governments collect air quality data. As a result, AACOG was forced to stop collections at several sites and lay off staff.

"To say the state can solve this problem on its own at the same time as they're tying the hands of local officials is just absurd," Metzger added.