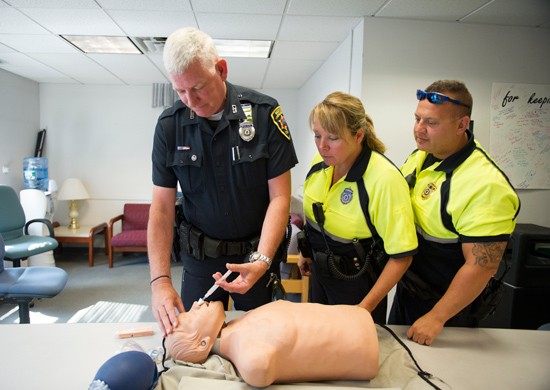 While the Texas Legislature passed a bill in 2015 permitting "any person in a position to assist in an overdose emergency" to use naloxone, the Texas Medical Board asked Paxton to verify that it applies to law enforcement officials, too. Many of the law enforcement agencies in the state, however, already arm their employees with naloxone, including the San Antonio Fire Department (which oversees the city's Emergency Medical Services).

Paxton's nod is a sign that Texas may be inching away from its staunchly conservative position on drug addiction.

When someone takes an opioid (like heroin, oxycodone, morphine, hydrocodone, or codeine — to name a few), the opioid attaches itself to certain receptors in a person's brain, causing a dopey high. If too many opioids stick to these receptors, a person will stop breathing, prompting an opioid overdose.

Naloxone, which can be injected or inhaled, kicks these opioids off the receptors for about 30 to 90 minutes — enough time to get someone to a hospital. Metro Health Director Colleen Bridger calls it an "instant detox." One of her top priorities as the co-chair the county's new "Opioid Task Force" is getting every San Antonio police officer to carry naloxone.

"One of the criticisms that you hear is that naloxone just enables people to take more drugs, because they’ll be able to be reversed every time," she told the Current in an August interview. "But it’s a horrible feeling. It’s an absolutely horrible feeling. It’s not something they look forward to or anticipate with glee."

The skepticism Bridger mentions is exactly what some conservative politicians lean on when arguing against naloxone — but it seems Paxton's seen the light.

Paxton's also joined a multi-state, bipartisan investigation into the role opioid manufacturers have played in the nation's deadly opioid epidemic — similar to the 1990s multi-state lawsuit against tobacco companies for not disclosing tobacco's link to a litany of fatal diseases.