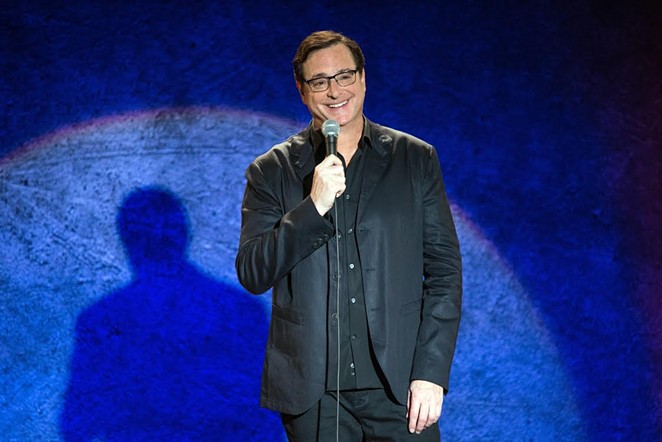 Like so many others, actor and comedian Bob Saget (TV’s Full House) is ready to put the pandemic behind him. While few comedy clubs around the country have opened their doors, the LOL Comedy Club is one that has started welcoming back talent and audiences. Saget will be performing two shows there this Sunday, June 6 at 7 p.m. and 9:30 p.m.

“You know what we’ve all gone through this last year,” Saget told the Current this week. “It’s like I’m unleashed.”

During the interview, Saget, 65, talked about what it’s like going on stage to do adult-themed jokes after being known as a straight-laced TV dad for so many years. He also discussed why he still enjoys doing standup and why he finds movies like Sharknado entertaining, but not ones like The Human Centipede.

For people who have never seen you do standup, they shouldn’t expect Danny Tanner from Full House, right? Your stuff is a lot more adult-oriented these days.

It must be a shock for some people to hear you drop F-bombs if they only know you as a TV dad.

If you see a Robin Williams movie, God bless him, he does Mrs. Doubtfire and then he does One Hour Photo where he plays a horrific character. But when you do a TV series [like Full House], people just see you as that. Their perceptions are theirs. I was doing standup since I was 17, so it was 13 years after that when I got Full House and [America’s Funniest Videos]. I actually got fired from a morning show because I was too dirty for morning TV. My joke has always been, “Anthony Hopkins does not eat people.” It’s called acting.

Filmmakers get that, too. If someone creates something like The Human Centipede, audiences automatically think there’s something wrong with their head because they were able to come up with a storyline like that.

Does the original Full House cast ever get to see you perform your standup?

Andrea Barber [who played Kimmy Gibbler] comes to my shows. She’s like, “F-you, Mr. T” from out in the audience. You know, people love to talk and spread rumors. But I’m so close with everybody from that show. It’s our inside joke that people [think we’re not]. People go through stuff after 30 years of knowing each other. I’ll be in New York in a couple of weeks, and I’m going to see Ashley Olsen. She’s a dear friend. I go out to dinner in L.A. with everybody — John [Stamos] and his wife Caitlin and my wife Kelly; Dave [Coulier] and his wife Melissa. Jodie [Sweetin] and Candace [Cameron Bure] were just on my podcast [Bob Saget's Here for You]. We love each other.

Are there any topics you won’t touch during your standup?

I won’t do religion and politics because that’s like ruining a date. I try not to talk about The Human Centipede either. [Laughs.] You know, the other night I watched Sharknado. I had never seen it. Sharks are caught in tornadoes flying through the air. Rubber sharks just land at people’s feet! It’s so great! I may talk about Sharknado. My job is to entertain people and bring them together, no matter how big or small the room. And I love San Antonio and those radioactive mosquitos you have at the River Walk.

Is doing standup today still as fulfilling for you as the first time you went on stage?

I have not been this excited to do it since the mid ’90s. When I stopped doing [America’s Funniest Videos] and Full House, standup is something I took really seriously. I started loving it more and touring more. Now, I’m loving it like I haven’t loved it in years, because I’m appreciative. Not being able to get out and perform and clubs being closed, it’s like being a prisoner from something [comedians] need to do. Being able to hear those laughs live is huge. It’s like I’m reborn. I’m 65, so it’s going to be an ugly birth.

Is it easier or more difficult today to make an audience laugh?

Anything online is harder, because I can’t just go on Twitter and play around. Too many people are ready to be critics. With standup it’s different. I’ve been doing it for over 40 years, and it’s not harder to make people laugh. Everybody hasn’t had a chance to laugh recently. So, it’s easier in some ways. I’m there to make people happy, and that’s what’s happening. These gigs that I’m doing, since the moment I started again, have been amazing.

You’ve done so many different things in your career. I’m sure kids today recognize you from Fuller House on Netflix and adults recognize you as a cocaine addict on Half Baked. What’s it like having such a wide audience?

I like wherever it comes from. I’m a little more responsible, I think, in a fatherly way. I get all age groups of people who have seen me on different things. Families will come up and appreciate me for something different. I’ve got people who come in and tell me they’ve seen me in a play or open at a rock festival. It’s interesting. I’m a chameleon in that way. Who I am changes, too, but people understand that I’m a good person.