Ahead of Tuesday show in San Antonio, European rockers Volbeat are glad to be back on the road 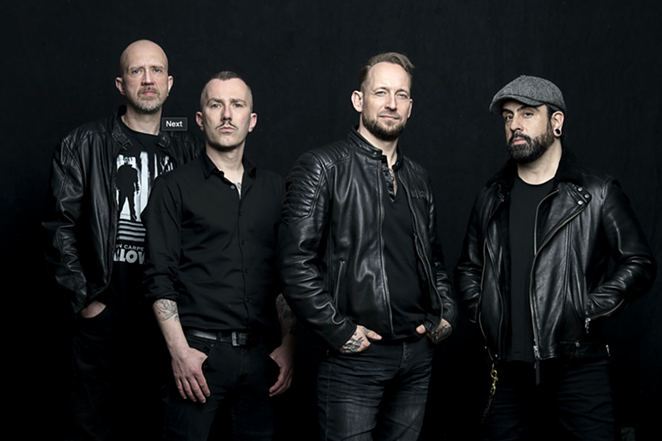 After the pandemic put touring on hold for months on end, members of Danish rock band Volbeat are glad to be back on the road in the States — much less anywhere.

Drummer Jon Larsen spoke with the Current by phone as Volbeat — whose sound encompasses elements of both heavy metal and rockabilly — prepared to play a set at the Louder Than Life festival in Louisville, Kentucky. The band’s first show in two years took place the night before in Atlanta.

“There were a few mistakes here and there,” Larsen said. “We were a little rusty. But it’s live music, it’s rock ‘n’ roll. We had fun onstage, and the crowd was into it. We were happy when we walked offstage.”

Volbeat, including founding members Larsen and guitarist-vocalist Michael Poulsen, are no strangers to touring Stateside.

“When we were kids, America was this fantasy land. You could get everything here. Music, movies, everything. Rock ‘n’ roll started in America. The first time we were here, it was like, ‘We’ve got to go to all the malls, we have to see everything.’ It’s still fun to tour here, even if we don’t have the same childish excitement. It’s still exciting to be here.”

Such exuberance about hitting the road is common in the music industry right now. Many acts have taken long stretches off the road in the face of COVID-19-related postponements and cancellations.

“We took a break for a couple of weeks, then met up in the rehearsal room, and Michael [Poulsen] started bringing in stuff,” Larsen said of Volbeat’s post-pandemic return.

The resulting album, Servant of the Mind, will be released December 3.

“Looking back, we had been touring, recording for almost 10 years without a break,” Larsen said. “All of a sudden, we’re home. We recharged our batteries and spent time with our families.”

Since forming in Copenhagen 20 years ago, the band has built an audience by combining genres and styles. Larsen said the mix was never forced, but rather, organic.

“When Michael and I started it, the stuff we came up with was a mix of everything from Black Sabbath to Offspring to Iron Maiden to you name it,” he explained. “In the beginning, I didn’t get it. Michael said, ‘I don’t care, let’s play what we want to play.’ Writing good, melodic songs is harder than people think. We grew up with a lot of Elvis, Beatles, Johnny Cash. Then Maiden. Then it’s Metallica and Slayer. A lot of people seem to get into it when we mix it up.”

That mix-and-match approach has allowed Volbeat to tour with a variety of acts, including a recently announced co-headlining tour with Ghost in 2022, which so far includes no Alamo City stop.

While Larsen expressed excitement about next year’s road work, he’s not optimistic that COVID-19 protocols or concerns will have faded by then.

“It’s going to be a while before we see things the way they used to be, if it’s ever how it used to be,” he said. “No one knows.”