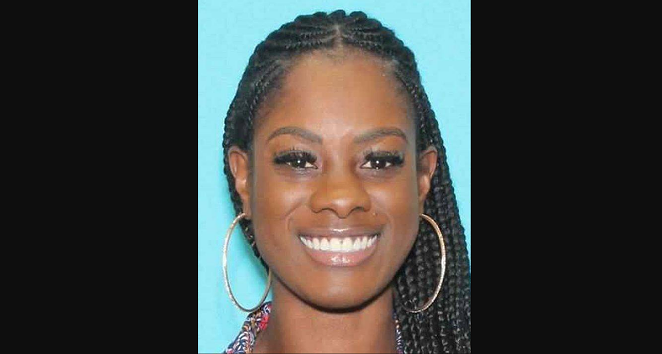 An Air Force major was arrested Sunday in connection with the disappearance of his wife, who authorities believe is dead.

Major Andre McDonald, 40, has been charged with tampering with evidence after tearing up a receipt for the purchase of a shovel, ax, gasoline and additional items that investigators believe he intended to use to bury his wife's body. None of the items were in the home when authorities first learned of Andreen Nicole McDonald's disappearance.

Family and friends haven't seen Andreen McDonald, a 29-year-old business owner, since Thursday. Police have named her husband as a suspect in the case.

During an initial search of the couple's home, a deputy noticed that the bathroom floor had recently been cleaned and that there was a red stain on a light switch. Both the floor and light switch were tested and had traces of human blood.

In the backyard, authorities found a burn pile that had recently been used. One of Andreen McDonald's friends noticed a zipper in the pile.

On Saturday afternoon, authorities set up surveillance on Andre McDonald, who was followed to a gun shop where he "hurriedly" purchased a firearm and ammunition. Bexar County Sheriff Javier Salazar said Andre McDonald was in such a hurry that he left behind the firearm he had just purchased as well as his ID.

"At that point, we were not certain if there were some suicidal thoughts going through the subject's mind," Salazar said. "[Deputies] made contact with him outside the residence, took him into custody, detained him at that point due to a possible mental health issue."

It wasn't until Sunday afternoon, however, that authorities identified Adnre McDonald as a suspect, though he was reportedly not cooperating with the search beforehand.

The sheriff's office obtained a second search warrant on Saturday night, when Salazar said investigators found "disturbing" items, including a portable burn barrel, that weren't at the home during the initial search.

"The evidence consisted of a shovel, an ax, some heavy duty trash bags, some work gloves and two five-gallon containers of gasoline," Salazar told the Express-News.

Based on that evidence, investigators concluded that Andre McDonald intended to dispose of a body.

"We believe that Andreen McDonald is no longer living," Salazar said. "There is literally no sign of her anywhere."
Salazar called the disappearance "very suspicious" after Andreen McDonald's purse, wallet and car keys were found at the home, saying that the 29-year-old would have taken such items with her had she left the area willingly. The woman's friends said it's "unfathomable" that she would abandon her daughter and business.

The sheriff said authorities presume Andreen McDonald is dead and are treating the investigation as a body recovery.

Andreen McDonald was reported missing on Friday by friends, who said she never showed up for work and suspected foul play. According to a KSAT report, one friend told deputies that the missing woman warned her multiple times that she were to disappear, "it would be because [Andre McDonald] killed her."

The couple has a 6-year-old daughter who is currently being cared for by a relative.

"This little girl is autistic, mostly nonverbal. To us, it's pretty evident she saw something," Salazar told reporters. "She saw what happened to her mom, and that's the most heartbreaking part of this case."

Officials are asking anyone with information on Andreen's disappearance to call the Sheriff's Office at (210) 335-6070 or email missingpersions@bexar.org or bcsotips@bexar.org.