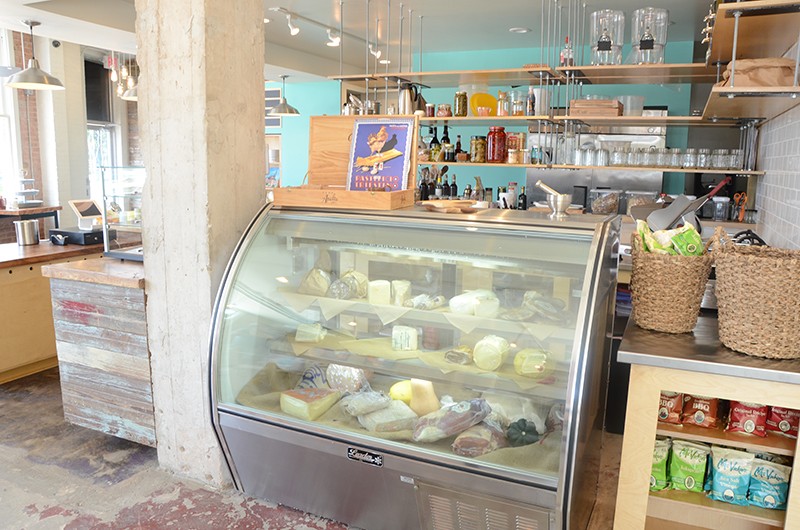 It's hard not to love a place where fresh varieties of creamy gelato are made almost daily, but what A La Mode Gelato's new home at the Blue Star Complex offers is so much more. The brainchild of native Texan Josh Biffle, the cozy 1,200-square-foot shop has the task of bringing a bit of Italy to Southtown.

Though Biffle may have graduated from UTSA with a degree in architecture, he found his calling in Italy while studying abroad. Biffle not only fell in love with wife Diletta Gallorini, but also with artisan gelato and pastries, so much so that he enrolled in a culinary program under gelato masters to learn the art behind Italian ice cream. Two years and a lauded apprenticeship later, the only American to complete the program (he's fluent in Italian) has come back home to open his own shop.

A La Mode's story began in mid-2014 when the newlyweds joined the late Quarry Farmers & Ranchers Market. Because San Antonian summers tend to outlast most other seasons, the gelato booth quickly built a following with market-goers hoping to cool down with a tasty treat. A masterful technique was key, but variety also helped grow fandom.

Gelati flavors change often, but favorites began to emerge in the subtle salted caramel and boozy vanilla bean bourbon. Others, like the gorgonzola and candied walnut, a popular combination in Italy, were a bit of a hard sell.

"You have to like funky cheese. I'm not covering up the gorgonzola flavor," Biffle said.

The same fresh flavors will be available at A La Mode's space in batches of 16, along with espresso drinks and sandwiches. Designed in part by Biffle and John Webb, a professor at UTSA who's also a bit of a renaissance man with a passion for sculpting (a sleek metal on-piece chair can be seen in the shop) and woodwork (most of it reclaimed and purchased through a vendor during Round Rock's Antique Fair), A La Mode's new home begs to be lived in.

Touches of Baltic birch and manglewood fill the airy shop, complete with exposed brick and polished cement floors. It's quaint, yet raw, an homage to Blue Star's past.

"We wanted to leave some of the industrial aspect of the neighborhood, of what the Blue Start Art Complex used to be, a train depot that had loading docks," Biffle said.

And if your appetite demands more than just gelato, the seasonal sandwich options look pretty killer. Biffle's mortadella on focaccia with pistachio butter and provolone sounds like we can hold off that trip to Italy ... for now.