Alamo Brewing could lure downtown traffic to the Eastside, if the city cuts a deal 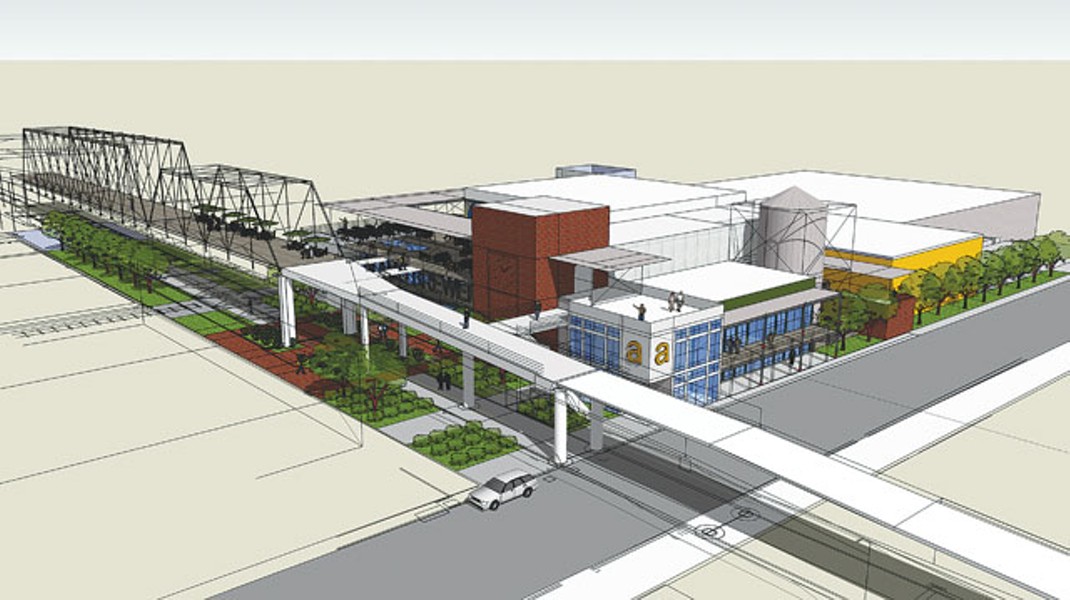 Another view of the proposed Alamo Brewery.

The view from the Hays Street Bridge tells stories for those willing to see them. To the north and west are views of the former Pearl Brewery with its 120-year-old castle-like tower and the original Lone Star Brewery. Those historical locales tell the tale of a once-proud industry that put San Antonio on the map decades before 1968’s HemisFair summoned the nation’s attention.

Turn the other way on the bridge and the view of the skyline is one of the best in the city, complete with the Tower of the Americas — that enduring symbol of HemisFair — and numerous sky-scraping hotels serving as a testament to our high-volume tourist trade.

But the bridge, restored in 2010, is also a link to potential new San Antonio stories and is making an identity on the city’s neglected near east side. It arches over a warehouse and manufacturing district to connect foot and bike traffic from a thriving downtown into quiet Eastside neighborhoods.

It took 20 years of tireless effort by conservationists and neighborhood activists to create that link, but to date it hasn’t been a catalyst for development. Now beer once again emerges as a possible solution.

“A brewery will help immediately enhance the area around the Hays Street Bridge,” said Eugene Simor, the owner of Alamo Beer Co., who hopes to build a brewery on city land on the opposite side of the bridge from his own Eastside tract. “Locals and tourists alike will want to visit the brewery, not just for the tour, but for drinks and meals as well” at a rooftop restaurant that links to the bridge.

Sound familiar? That kind of infill thinking is what turned the River Walk from a flood-prevention drainage project in the 1930s into one of the most famous tourist attractions in the country. It took the abandoned Lone Star Brewery and gave the city the San Antonio Museum of Art. And in the last few years, the old Pearl Brewery has become a hub for lower Broadway with shops, restaurants, offices, and the Culinary Institute of America campus.

Many people in the Dignowity Hill neighborhood are all for it, seeing an opportunity for an architecturally pleasant — albeit light-industrial — building. But some, including an outspoken activist who made it her mission to see the bridge restored, think the space should be a park instead.

When former BudCo owners Berkley and Vincent Dawson moved the Anheuser-Busch beer distributorship to new digs on Highway 90, they donated the land to the city. The only stipulation was that if the city decided to turn it into a park, it would be named after them. It has been a decade since that move and nothing has been done to make improvements to the property. The city parks department has never accepted the land into the parks system because of lack of funds.

Simor, whose Alamo Golden Ale has been brewed under contract by Real Ale Brewing Co. in Blanco for the last eight years, has another vision for the area: the industrially zoned property is only a 12-minute walk from his brew’s namesake shrine, offering a perfect neighborhood gathering place. So he bought property on the south side of the bridge through a family trust for an undisclosed amount.

But resistance came when he proposed using that lot for parking and building the brewery on the city land to the north instead. Because the brewery needs to be 40 feet at its highest point to accommodate the vertical fermenters needed to make the beer at a large enough volume, building on Alamo’s existing lot would mean blocking the view of downtown from a portion of the bridge.

Simor and economic consultant Trey Jacobson are trying to work out a swap with the city, trading protection of the view for the land on the other side of the bridge. But Nettie Hinton, an Eastside activist and part of the Hays Street Bridge Restoration Group, said the Dawsons were going to sell the land until she approached them with a few others to ask the brothers to donate it for a park. Hinton said the land — which had primarily been a staging ground for Budweiser trucks to load up and make deliveries — was valued at $250,000 at the time of the sale. And that the Dawsons even paid for an environmental assessment of the lot.

City officials say there are no stipulations on how the land can be used, and Vincent Dawson sent a letter to Juan Garcia, president of the Dignowity Hill Neighborhood Association, saying he didn’t object to a brewery on the site because it fulfilled his goal of having the donation be a cornerstone for community development, Garcia said.

“Some people want a fifth park in the area, but developing the land directly under the bridge would connect the bridge to Maverick Park and the Eastside to Lower Broadway,” Simor said.

But Hinton says Simor’s plan violates the spirit of the bridge restoration; she called the city “immoral and illegal” for considering anything but a park for the land and said Simor is “cherrypicking and appropriating it for his own benefit.”

District 2 Councilwoman Ivy Taylor is waiting to see what the community wants before she gives definitive backing for a brewery or a park. “We’ll have a series of neighborhood meetings to find out as a neighborhood how to plan and meet our goals,” Taylor said. If the city shoots down Simor’s proposal for the city land and he develops his existing land tract, Taylor said she would do what she could to stop a taller structure from going up on the south side of the bridge, or at least minimize the impact of it.

While Taylor is on the fence about the fate of the city land, she is in support of more businesses in the neighborhood and wants to push infrastructure improvements, like sidewalks and drainage improvements, in the 2012 bond election to stimulate development.

And yet a park could prove to be a difficult proposition: Only 15 houses in Dignowity Hill would be closer to a possible Dawson Park than to the four parks already in the area, and there is little money in the city budget (and no water) to care for the existing parks.

Hinton charges that it is mostly newcomers to the neighborhood who claim existing parks are underutilized. “Some people are only concerned with property values,” she said.

Mildred Bailey, a resident of Dignowity Hill for 40 years, said she doesn’t see the need for a brewery but is ambivalent about another park because “the biggest concern is having the sidewalks fixed” and drainage improved.

Microbreweries have a history of becoming part of the community when located in urban areas. Most notable is Brooklyn Brewing Co. in New York, where on Friday nights the neighbors come out to the brewery to mingle with each other and a few beer tourists. But it has become a victim of its own success as former vacant lots and warehouses around it now thrive, leaving the brewery no place to expand. A new Saint Arnold Brewing Co. located in a once-rundown part of downtown Houston now draws 1,000 people for Saturday tours and 100 to 300 for daily tours.

Jim Gipson, who moved to San Antonio’s east side in 2003, said an Alamo brewery would be an enhancement with its proposed restaurant, added lighting, and possible increase in police presence. “I would rather see a well-maintained building than what we have now, which is a wasteland.”

“There’s a lot of support bubbling up in the last month for a brewery,” Garcia said.

On Monday, the Dignowity Hill Neighborhood Association heard from park advocates nearly a month after hearing from Alamo Beer representatives, and voted to endorse the brewery concept.

City-coordinated meetings to discuss the former Dawson land and other Eastside issues will be held at 6:30 p.m. on July 27 and Aug. 4 at locations still to be determined. •