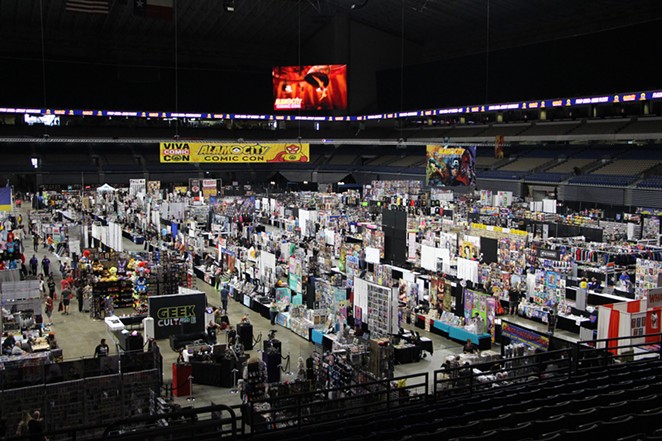 In 2018, Alamo City Comic Con made a big move – from the Henry B. González Convention Center to the Alamodome – and brought in big guests, including Arnold Schwarzenegger and Rick Moranis. However, it also courted controversy, as the con's cosplay contest was marred by host Travis Lara's blackface cosplay.

Since the end of 2018's event, ACCC seemed to have gone dark – there was no news regarding a 2019 con, and as recently as last week ACCC's website still featured all of 2018's info.

That ended today, when ACCC finally announced its 2019 convention via press release and social media posts. The event will take place in less than two months – October 31 or November 1 to November 3, depending on whether you believe the Facebook status or the official event flyer – and has moved yet again, this time to the outdoor venue Sunset Station. The downtown event space, located right next to the Alamodome, is a big downgrade in size – Sunset Station's combined venue space is a mere 20,000 square feet, which is paltry in comparison to the hundreds of thousands of square feet of H.B.G.'s exhibition halls.

Unsurprisingly, fans have reacted with shock and confusion. Commenters on Facebook expressed varying levels of incredulity, which was not abated by ACCC's canned responses regarding the venue, date confusion and lack of an official guest list.

Regarding concerns about the venue, ACCC responded, "Unlike corporate events, we are from San Antonio! We live here, work here, raise our families here and we know what the weather brings; so, of course, we've got you covered (literally). We are not about to let Mother Nature ruin the best party in San Antonio. There will be structures erected to accommodate this event, keep the temperatures comfortable and more! #AlamoCityComicCon #AlwaysEvolving"

As for the date confusion? They only replied, "We might have something planned for October 31st..."

All issues aside, there's nothing geeks love more than to congregate together in elaborate costumes to try to meet their favorite celebs. Anyways, even if ACCC's 2019 guest list doesn't live up to fan expectations, it's won't be very hard to fill Sunset Station to the brim.