Alamo City Tattoo Show Claims To Be The Real Deal 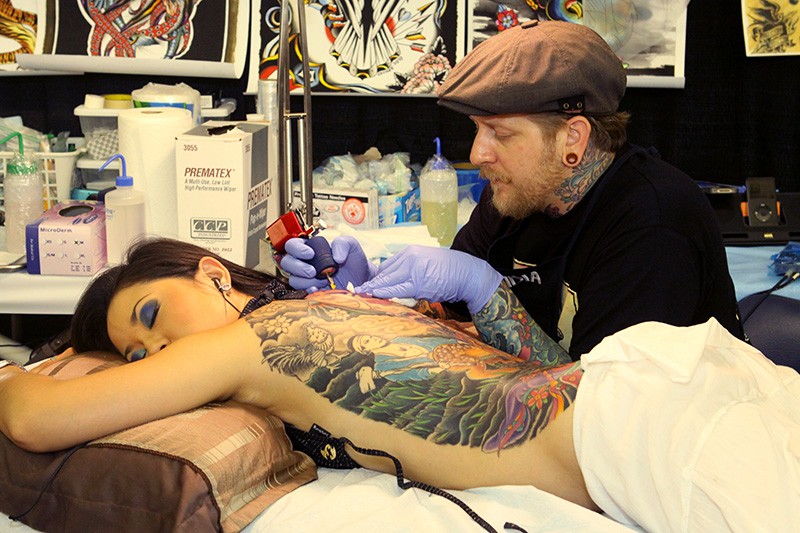 After the 12th Annual Slinging Ink Tattoo Expo and the Inaugural Texas Tattoo Jam butted heads in March when both shows opened back-to-back causing conflict between organizers, many wondered if there was enough room for multiple expos in San Antonio.

Waiting quietly in the wings and away from all the drama was Anthony Montemayor, owner of Arc Angel Tattoo in Universal City and creator of the Alamo City Tattoo Show, which celebrates its 11th year as the only one of the three local tattoo shows run by an actual tattoo artist.

That fact alone makes all the difference and proves his event is the preeminent one in the city, Montemayor said.

"Those other tattoo shows are run by tattoo pimps, not by tattoo artists," Montemayor told the San Antonio Current last week. "They rape the tattoo artists. Tattoo conventions weren't started by production companies. They were started by people with a love for tattoos."

Not impressed with the extra side attractions the other tattoo shows provided — concerts, flesh suspension performances, escape artists, etc. — Montemayor said his event is "strictly about the art of tattooing and nothing else."

Simplicity is the name of the game as far as he's concerned.

"I want people to come in specifically to get tattoos at the convention," Montemayor said. "I'm not doing this so people can come drink beer and listen to live music."

Over 200 tattoo artists from around the country are scheduled to participate, including shops from Florida, California and Maryland. Local shops like Element Tattoo, Dandyland Tattoo Studio and Calaveras Custom Tattoos are also on the roster.

Jenny Siegel, tattoo artist and owner of Tattoo Eleven on the city's northeast side, said she respects what Montemayor has been doing with his show for more than a decade. Before opening her own business, Siegel worked at shops that were not owned by tattooers.

"A show like Anthony's is more personal because he knows how we work as tattoo artists," said Siegel. "He caters to his artists and understands what we need. Someone who has never done it before tends to work [their tattooers] a lot harder."

For Montemayor, the Alamo City Tattoo Show is at a good place. He looks forward to watching it grow and staying faithful to the craft.

"I only really worry about my own show," he said. "I don't care what the other tattoo conventions do. I just know they don't have the true love for it like I do."