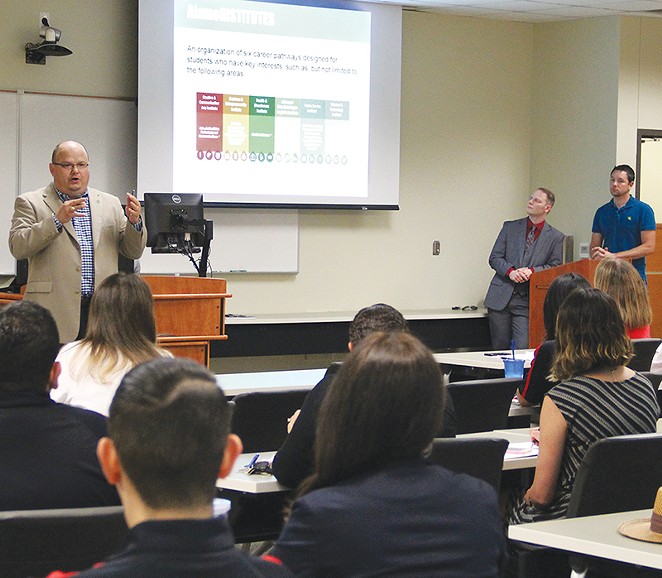 Kingsbery and Wong are made presentations at district colleges to help employees understand the importance of Alamo Institutes and the district's new advising model.

Students in Alamo Colleges are graduating on average with 92 semester hours and spending 4.4 years getting an associate degree, according to the 2015 Texas Higher Education Almanac.

Vela said the Alamo Institutes would "create clear academic and career pathways and help students choose a pathway early in their college careers."

There are six career pathways designed for Alamo Institutes — Creative and Communication Arts, Business and Entrepreneurship, Health and Biosciences, Advanced Manufacturing and Logistics, Public Service and Science and Technology.

"A lot of wonderful work went into fitting our programs into each of the six pathways with just a few stragglers," Vela said.

Wong and Kingsbery said that, according to the Community College Survey of Student Engagement, 80 percent of incoming students nationally come to community colleges with the intent of transferring to a four-year institution or graduating.

They cited national statistics showing that, as of 2009, 29 percent of students graduate from community college in three years.

Wong said because of the low graduation rate, the Alamo Colleges is doing a poor job of serving students.

Wong said students upon transferring are losing up to 30 credit hours and falling behind industry standards because they spend so long getting a two-year degree.

Vela said this isn't just a problem at Alamo Colleges but it's nationwide problem as industries are changing and as students' education in a particular field becomes dated the longer it takes students to get a degree.

"We need to make sure we are current with these [industry] changes or else we aren't giving our students a chance to succeed," Vela said. "Our goal is to create a stronger academic support for our students."

Wong detailed his own experience as a student in the Alamo Colleges, where he was largely left to figure things out for himself.

Wong said it took a professor's initiative that provided him direction. Wong graduated in May with an associate degree

"Why does it take someone I know personally to tell me what I should do?" Wong said. "It would have been beneficial if I had someone to help guide me."

Some faculty, staff and student representatives brought up fears that the more intrusive advising would pressure students to make decisions based on efficiency only.

Vela said that Alamo Institutes and other programs are designed to help expose students to things they wouldn't consider and ultimately the students make their own decision without pressure to make a change.

At a Faculty Senate meeting in May, Dr. Lisa Alcorta, interim vice president of student success, said that through the Alamo Institutes, MyMap and Alamo Advise programs, Alamo Colleges would have more intrusive advising as well as faculty mentorship.

"The MyMap framework encompasses the Alamo College student journey from the point of first contact to attainment of a degree or certificate, and through transition to employment and/or transfer," according to the executive summary.

Alamo Advise is the new advising model by which advisers will be assigned caseloads.

Alcorta gave details on the MyMAP program and said 50 of the 60 promised advisers would be in place for the fall but would need help from the faculty.

Alcorta told senators that faculty also should help with recruitment on a voluntary basis.

This made some in the senate worried that this would eventually become required of professors and they envisioned an awkward process of contacting 18-year-old potential students.

Sean Duffy, a history professor, said, "I can just imagine calling an 18-year-old saying, 'Hi I'm Dr. Sean Duffy,' and they respond 'who the hell are you?'"

"You need more money to hire more people, so why are we spending more and more money on administration?" Settles offered.

Reprinted courtesy of The Ranger, the student newspaper at San Antonio College.