Alamo Colleges Board of Trustee Candidates Focus on Chancellor’s Leadership 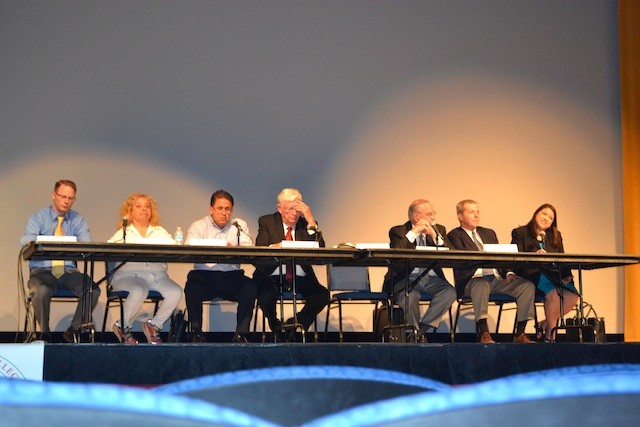 Five minutes into a sparsely attended candidate forum at San Antonio College last week, it became clear that the upcoming Alamo Community College District board of trustees race is as much about strengthening the direction of the five academic institutions as it is a referendum on Chancellor Bruce Leslie’s leadership style.

Embroiled in controversy, the Alamo Community College District has seen better days. Leslie’s recent move to replace a humanities class with EDUC 1300, a course based on the self-help book 7 Habits of Highly Effective College Students, to the mandatory curriculum without seeking approval of professors first, left faculty, staff and students up in arms, as our April 16 cover story explored. While Leslie eventually reversed the decision—following a highly circulated petition, student uproar and an investigation by a national accreditation board—the criticism isn’t slowing down. Now with three seats on the Alamo Colleges board up for grabs in the upcoming elections, candidates are taking the opportunity to sound off on Leslie and promise reform and accountability.

Generally, the new-to-the-game candidates (all in attendance with the exception of District 4 candidate Albert Herrera) took aim at perceived increased administration spending, bloated bureaucracy (especially the rise in vice chancellors) and a lack of investment in students. But the central focus of the non-incumbent concerns during the Wednesday afternoon forum revolved around the chancellor’s lack of inclusion in the decision-making process.

“I’m tired of having a chancellor who doesn’t listen to the voice of the students or what the community wants … This is not right, this is not a dictatorship. It’s time for us to take the power back,” District 4 candidate Enedina “Exon” Kikuyu said.

To heavy applause, middle school teacher and District 8 candidate Clint Kingsbery, echoed later, “I realize the chancellor gets a lot of business awards, but last I checked we’re an educational institution and that’s what we should be focusing on … It’s time for the chancellor to answer for problems he’s caused our schools over the last six years.”

District 9 candidate Felix Grieder, former director of USO San Antonio, called for more due process and guaranteed to ensure the compromise not to implement EDUC 1300 in the core is not just a temporary decision but a permanent one.

“Ironically, today there’s too much collaboration on the board. We have a chancellor right now that says what he wants, and the board goes along with him,” said Grieder. “We need to have checks and balances; we need to have independent thinkers. Right now we have a chancellor that’s shown disrespect to the faculty, disrespect to the student body and a certain amount of arrogance. That needs to change.”

On the flipside, old-guard incumbents District 9’s James Rindfuss and District 8’s Gary Beitzel, both supportive of the 7 Habits-based course, defended the administration status quo, pointing to increased faculty pay, trimming the budget while offering low student tuition and the adoption of a policy that offers free instructional materials. They also credited the administration with getting behind the idea of appointing a student trustee to the board—the first attempt to do so by a Texas community college, according to Rindfuss.

However, the historic student trustee position didn’t go far enough for some candidates. Aside from the fact the student trustee cannot vote and is relegated to an advisory capacity, some felt the role needed to be expanded to five representatives, one for each college and that the appointed (not elected by the student body) position could turn into a lackey post for board members.

“Having only a singular trustee seems, well, negligent to the different views of all the schools. They should be voted in by students of the schools rather than appointed by the board. Otherwise, [the board] may just appoint someone that agrees with them on everything,” said Kingsbery.

Board of trustee responsibilities include approving the annual budget and student tuition, accepting admission and registration policies and evaluating recommendations concerning the appointment or dismissal of other administrators and faculty. Trustees also hold the power to evaluate the performance of the chancellor, approve substantive changes to the chancellor’s job description and to, “[E]nhance the public image of the Alamo Colleges.”