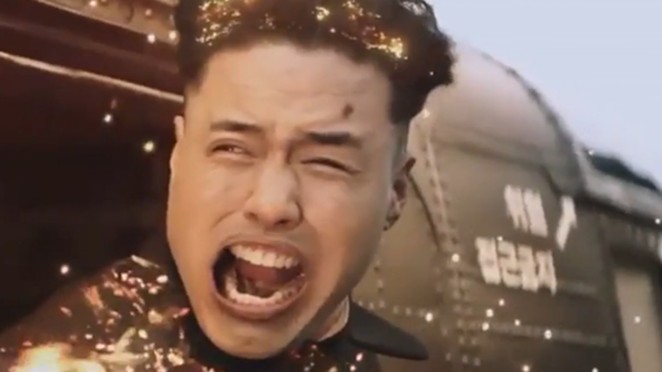 The year draws to a truly bizarre close as the leaders of North Korea’s self-described “socialist state” continue to retaliate against Sony Pictures Entertainment for its production of The Interview, a political action-comedy starring James Franco and Seth Rogen that depicts Kim Jong-un’s assassination to the tune of Katy Perry’s “Firework.”

November witnessed a series of hostile cyber-attacks on the media conglomerate by a malicious hacker force operating under the moniker of “Guardians of the Peace.”

The hackers—who U.S. intelligence has officially connected to North Korea—leaked unreleased films such as Annie and Mr. Turner in addition to unsavory emails from co-chairwoman Amy Paschal tinged with racist remarks about President Obama. (You can read Vulture's breathless coverage of the entire hack saga here.)

On Wednesday the hackers further threatened Sony by claiming they would take terrorist action during The Interview’s New York City premiere at Sunshine Cinema, prompting Sony to halt the film’s nationwide release indefinitely. In a end-of-year press conference today, President Obama called the cancellation a "mistake."

While Sony’s decision was derided by actors and filmmakers alike, the Alamo Drafthouse and other U.S. theater chains proposed to replace showings of The Interview with Team America: World Police—a satire created by Trey Parker and Matt Stone, the duo behind “South Park” and “The Book of Mormon." The film features a sick musical number by North Korea’s former leader, Kim Jong-the-illest—until the film’s distributor Paramount Pictures ordered theaters to ax these showtimes.

Prior to Team America’s cancellation, the Alamo Drafthouse originally published a bombastic announcement of the film’s 10th anniversary on its website.

“Sure, you can celebrate your independence the usual way: slow sipping a beer as you stand over a grill while people you have only mild contempt for wait inside for their free meal. OR you can join The Action Pack as we celebrate the GREATEST MOVIE MADE ABOUT AMERICAN PATRIOTISM EVER and celebrate its 10th anniversary!"

However, yesterday the cinema chain sadly admitted to canceling its screenings of Team America “due to circumstances beyond our control” on Twitter.

It seems that now, thanks to baby boy Kim Jong-un and the cowardly actions of motion picture distributors, we have to scour the Internet for banned movies from the comfort of home this holiday season. Or you can watch the "Fuck Yeah!" music video from Team America. It'll make you love the U.S. of A. so hard.