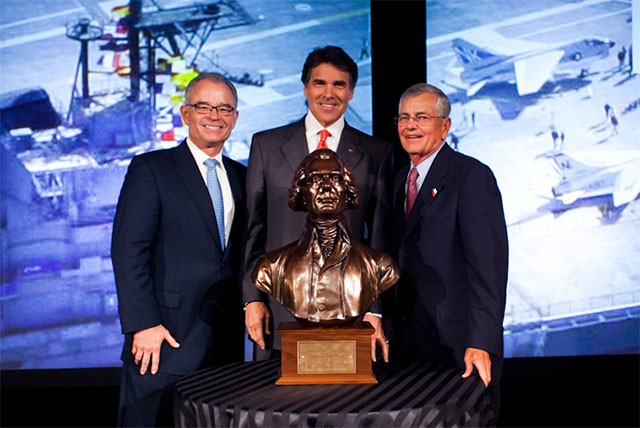 State Sen. Tommy Williams, R-The Woodlands, is on a mission: to stop out-of-work drug users from financing their habit with unemployment insurance.

Well, some of them, at least. The thrust of Williams' SB 21 would require that the Texas Workforce Commission conduct drug screening of anyone claiming unemployment insurance in the transportation and healthcare industries. As Williams told a Senate committee last week, “If an individual's drug use is having an effect of making him or her unemployable, it is a matter of concern for the state.”

“This is a solution looking for a problem,” countered Sen. Wendy Davis, D-Fort Worth. What's the point, Davis asked, if the worker was drug-tested in their last job and is very likely to be tested again before being hired for their new job?

If Williams' bill sounds familiar, it's because it is. SB 21 looks like a watered-down version of a 2011 Florida law requiring drug testing for all state welfare recipients.

The connection wasn't lost on Davis, who in committee referenced Florida's costly program, which unearthed few drug-abusing welfare recipients before the courts ruled the law unconstitutional. “Certainly the State of Florida found a greater cost than savings,” Davis remarked.

The idea behind Williams' measure caught on with conservative lawmakers long before he filed his bill. Similar laws popped up in Arkansas and Wyoming by legislators who, like Williams, keep close company with the American Legislative Exchange Council.

ALEC, of which Williams is a member, has been a key forum for issues like drug-testing welfare recipients. In fact, Florida's contested law came straight from the ALEC playbook.

Once largely unknown, ALEC has gained infamy in recent years as the perennial boogeyman for liberal watchdogs. The non-profit 501(c)(3) organization is a consortium of private corporations, industry groups, and state lawmakers. Notable members include Pfizer, Shell Oil, and Raytheon. Through conferences and publications, corporations and conservative policy wonks promote “model bills” that lawmakers attempt to shepherd into law in their home states.

Bits of those “model bills” have crept into some of the over 5,500 pieces of legislation filed in Texas this session.

Rep. Dan Patrick, R-Houston, has proposed expanding the number and reach of charter schools, as well as the creation of a voucher system. Though not an ALEC member, critics say it's no coincidence that Patrick's legislation mirrors ALEC priorities.

“The entire push for education vouchers is all ALEC,” says Phillip Martin, political director for the liberal advocacy group Progress Texas. “If you look at the witnesses Patrick has brought forward (in committee hearings), they are all ALEC members.”

Or, consider Rep. Linda Harper-Brown, R-Irving, who is proposing the expansion of the Texas Virtual School Network. Although the for-profit K-12 system has been criticized for lax accountability since its inception in 2007, expanding such programs across the country remains an ALEC priority, made clear in the group's “Virtual Public Schools Act.” Our Virtual School Network was initially advanced by now-retired state Sen. Florence Shapiro, who sat on ALEC's Education Task Force alongside representatives of companies like Scantron and Dell.

Now, Harper-Brown, who attended ALEC's education policy meetings, is picking up where Shapiro left off.

Sen. Kel Seliger, R-Amarillo, is touting the ALEC agenda on another front with SB 674. Closely mirroring ALEC's Secret Ballot Protection Act, the bill would prohibit workers from union organizing by signing up a majority of their colleagues, a practice known as a card-check.

Leading the effort to advance ALEC's priorities in the 83rd Lege is Rep. Jodie Laubenberg, R-Murphy. Named Texas State Chairwoman for ALEC, the six-term Republican from the Dallas exurbs is author of the House's companion drug-screening bill.

And Laubenberg's HJR 61 would require three-fourths approval from the House and Senate on any bill imposing or extending a state tax or fee, actually going above and beyond ALEC's Super Majority Act, which sets the bar at a two-thirds vote.

“It fits into this whole ‘starve the beast’ approach to governing,” says Brendan Fischer, staff counsel with the Center for Media and Democracy.

Laubenberg has had plenty of help representing Texas at ALEC – or vice versa. Nine Texas lawmakers have claimed ALEC conference-related costs as campaign expenditures in 2012.

Nonetheless ALEC has seen defections in the past year. Twenty-four Texas legislators publicly quit the organization in 2012. Many of those cutting ties were yielding to pressure from groups like Progress Texas, following a name-and-shame campaign to out ALEC-affiliated politicians and companies. Civil rights groups loudly criticized the organization's role in promoting Florida's “Stand Your Ground” law following the shooting death of Trayvon Martin.

“The way they have been successful for so long is that they operate in secret,” Fischer says. “It has really been in the past year that people have begun to recognize ALEC for what it is.