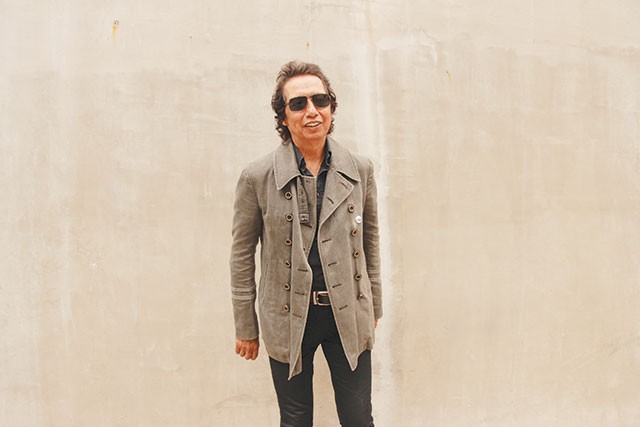 Due to an act of parental deception (more on that later), Texas rock god Alejandro Escovedo got his start in one of the least Lone Star-like places in the United States. Escovedo was born in San Antonio, but his musical career really began in San Francisco, where he played with first-wave punks the Nuns, a band he started with fellow film student Jeff Olener after the two decided to make a movie about “the worst band in the world.” He left the group before they recorded their only album and moved to Austin, where he played in the twang-friendly garage rock bands Rank and File and the True Believers, and eventually dropped one hell of a killer solo debut (Gravity, 1991) followed by 13 other critically acclaimed albums, including the tragically but certainly accurately titled live album More Miles Than Money (1998) and the masterpiece The Boxing Mirror (2006).

Days before his Friday gig at Sam’s, he spoke with the Current on the phone.

I’ve never come across any recordings of you playing with the Nuns, but I was curious…
Consider yourself lucky (laughs). You’re fortunate you never heard the Nuns.

I was curious whether you thought that if you had been playing as the Nuns in Texas around the time of Rank and File, do you think that also would have been called “cow punk”? How much difference was there?
The Nuns were punk rock. They were all New Yorkers. They were urban kids. They hated when I [listened to country music]. They thought I had fucked with the devil.

Did you try to incorporate country influences into the Nuns’ music, and they wouldn’t have it?
I never tried, but whenever I would listen to Hank Williams they’d say, “Turn that shit off! What are you, some kind of redneck?”

I read a review of your debut that speculated that the album’s quality was the result of you spending more than a decade playing music before you recorded it. What were some of the lessons you learned in that time?
Everything that I learned up until when I made Gravity, really, I was learning as a beginner. I knew nothing. Every person that I met along the way I learned something or another. Judy Nylon I learned a lot from in New York and I got to hang out with John Cale and Brian Eno and all those people, so I learned a lot there and I brought that with me here to Texas. In Austin I learned songwriting from Joe Ely and Butch Hancock, all these great songwriters. Doug Sahm, he’s like the perfect example of what Texas music is all about. He was like a musical sponge.

You just named about five musicians that other people have based their entire careers on imitating. How do you learn from these people without co-opting their style?
Well, I think what saved me in that respect was I was trying to copy them and I was trying to rip them off, but I was just too inadequate of a musician, so it ended up sounding like something completely different.

Is the song “San Antonio Rain” [from 2012’s Big Station] based on a real thing that happened to you?
When I was about seven or eight years old, we left [San Antonio] early and we went California. My parents said we were going on vacation, and we never really came back to Texas. “San Antonio Rain” is about a guy who comes back to a place where he felt very comfortable, but he feels a little uncomfortable there now.

How long did it take you to figure out you were staying in California?
It didn’t take long. (Laughs.) When you move into a new house, it ain’t subtle, you know.