All About the Execution: Spoon Eatery Aims For the Middle, But Its Kitchen Hits Plenty of Highs 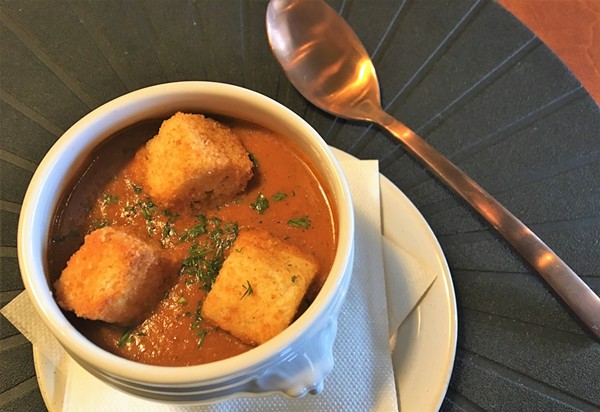 Restaurant Weeks throughout the nation have offered diners pared-down versions of local menus or looks at experimental works in progress. Plan ahead, because twice a year, San Antonio’s own Culinaria allows you to experience a place you might not usually venture to try at full price: a $35 dinner is pretty powerful persuasion.

For a restaurant critic, Culinaria’s lure isn’t altogether different. I hit upon Spoon Eatery in Castle Hills, taking advantage of the fixed dinner menus but selecting dishes usually available at all times. I admit to choosing Spoon despite their use of the word “eatery.” (Really? It’s a food cliché; they spent real money on this place.) I also chose it despite a menu that, to this writer, falls into that no man’s land of restaurants that offer neither new and trail-blazing experiences or the quirk and comfort of a mom-and-pop establishment.
But here’s the thing: while a tenderloin, grilled salmon and chicken breast may not stir the culinary thrill-seeker’s libido, there’s value in passionate, well-executed, if pedestrian-sounding, dishes. Call them pot boilers with a pedigree.

Let’s start with the skewered pork belly bites, an unexpected hit — unexpected because pork belly is beginning to wear out its welcome. However, each bite was voluptuous, the lushness of the fat contrasting beautifully with crisp skin. Both were accented by a housemade barbecue sauce with some serious complexity, offering an almost tar-like texture and color with rewarding fruit, smoke and heat.

The next course — the house salad, a dish with a menu description that read like a dating app come-on, promised an oddly enticing “peanut butter vinaigrette” but delivered nothing on top of the otherwise excellent greens. The lobster bisque, on the other hand, under-promised and overdelivered. Brothy, tasting unabashedly of shell and not depending on cream for its appeal, the soup kept a secret that was ready to be revealed after a little probing — a dropped kerchief of squid ink pasta demurely veiled a small handful of shrimp. The wispy swirl of goat cheese was unable to contribute much in context.

Pan-seared red snapper and pato en mole negro were enticing main course menu items, the description of the duck rising to near seductive status. Though the description of the snapper was ordinary, it was nonetheless impeccable — flaky flesh, crackling skin and young vegetables, cooked al dente, bathed in a silky, yet slightly aggressive soy-ginger sauce. The regular menu’s potato galette was substituted by less-posh mashed potatoes, but they were very good mashed potatoes. 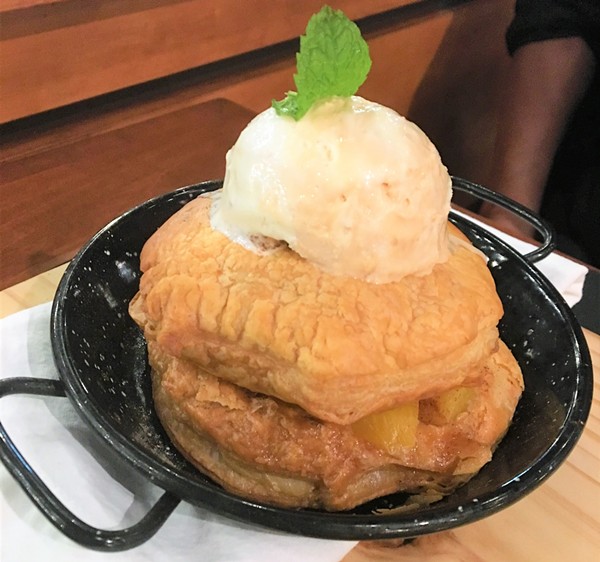 Perky, petite vegetables, including chayote, also accompanied the duck in mole sauce. My dining companion somehow snagged the best of the dish, cooked medium rare, but even the more mature parts inspired appreciation. And the mole was no mere flirtation. Rick Bayless, a chef known for his celebration of Oaxacan cuisine, uses a mole negro recipe made with 27 ingredients, four kinds of chile among them. I can’t say that Spoon’s open kitchen went quite as far, but it hit all the deep, sensuous flavors.

A “deconstructed” peach cobbler and “decadent” brownie got the dessert nod. The brownie was dry, while the cobbler read more like an apple tart a la mode that had been pulled apart, jaunty beanie of puff pastry and all. But despite its slightly forced of-the-momentness (most times, a good ol’ county fair cobbler is nothing to be ashamed of), it was a good end to the meal.

On a second visit, this time for lunch, the first course options offered three soups, including roasted tomato, a regular menu item. Normally presented with billowy puff pastry, the lunch serving sported croutons — but melting into the thick, herby soup as they did, might have proved that beauty is only skin deep.

Other options, such as the fettuccine Alfredo are rarely pretty. Butter, cream and cheese combine as an effectively monotone plate, aside from small minced chives that garnished the dish. For both visual and taste reasons, you might want to consider the sautéed shrimp add-on (normally $14.95). They’re good, and they play prettily with the nutmeg-accented sauce, though there may have been too much. In Italy, it’s all about the pasta — it’s not house-made at Spoon, but it’s respectable nonetheless. When the lasagna is paired to the house’s sprightly marinara, it needs no further embellishment but a glass of wine from the demurely priced list.

We’ll excuse Spoon from referring to itself as an “eatery” — just this once.