'All the Houses' Finds Familial Tragedy in Political Scandal 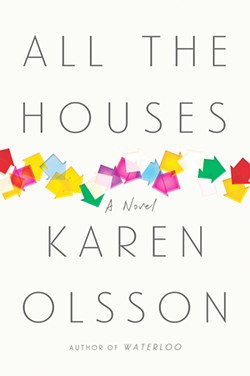 The median age in the United States is 36.8, which means that most Americans have at most a dim recollection of Iran-Contra, a scandal that almost toppled the Reagan presidency. Administration officials covertly sold arms to Iran and siphoned the profits to right-wing guerrillas attempting to overthrow Nicaragua's Sandinista government. Both ends of the operation were illegal; selling arms to Iran violated an embargo, and Congress had explicitly prohibited funding the Contras. Numerous investigations were impeded by the administration's refusal to provide key documents. Though more than a dozen defendants were indicted, no one went to prison in the end. All convictions were nullified by pardons from President George H.W. Bush.

Finale, the Thomas Mallon novel released in September, is set in 1986 and focuses on familiar public figures – Ronald and Nancy Reagan, Richard Nixon, and Mikhail Gorbachev, among others. But All the Houses, Karen Olsson's second novel, demonstrates how the political is personal, how fallout from Iran-Contra sends toxic radiation into the home of Timothy Atherton, a mid-level functionary on the National Security Council. Working under Reagan's national security advisor, Robert McFarlane, and later his successor, John Poindexter, Tim plays a minor role in the sordid affair, but he emerges without a job or a wife and with a strained relationship with his three daughters. "This was my family's encounter with History," writes Helen Atherton, his middle daughter, 20 years later. "The scandal seems to me, in its mysterious, byzantine way, to be more than a political mess that had sullied my dad. I sometimes thought of it as a puddle in which a whole swath of sky was reflected, as well as, from certain angles, my own face."

When her father suffers a heart attack in 2005, Helen, who has been struggling as a screenwriter in Hollywood, returns to the family home in Washington, D.C. Her determination to discover what really happened in the 1980s provides Helen with a purpose she had been lacking. While trying to research and write the political memoir her father never gets around to completing, she tells the personal story of growing up within a fractured family. She revisits the troubled adolescence of her older sister Courtney, now a lawyer with an environmental nonprofit, and concludes that: "I still believed in some sort of transcendent sisterly intimacy."

In 2005, when Olsson, a former editor of The Texas Observer and current contributing editor to Texas Monthly, published Waterloo, perhaps the best novel ever written about Austin, I reviewed it in these pages as "a melancholy, jolly take on human imperfection." All the Houses is a sobering Washington novel about life within a house in the nation's capital that was not as big or white as the one on Pennsylvania Avenue.

Literature All the Houses Karen Olsson