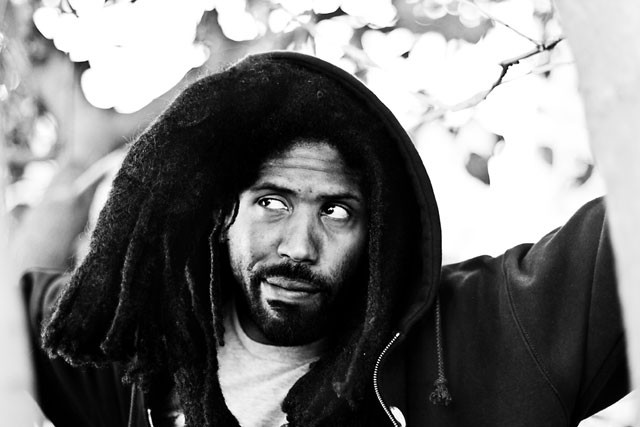 Know him:
Ever wish you could satisfy your lust for hip-hop without overlooking messages that degrade women, glamorize gun and drug culture, and are willfully un-empathetic? Whether you are a casual fan or a longtime student of the game, MURS ("Making the Universe Recognize and Submit" or "Making Underground Raw Shit") is a force you must contend with if you're thinking of putting hip-hop in a box. A hard-working and slightly off-kilter old school MC since the mid-'90s, in his multi-varied work MURS embraces emotional confession, marriage equality, introspection, temperance, peace, general positivity, and even soccer.

Hear him:
In "God's Work," a song from 2003's solo effort The End of the Beginning, MURS details the trials of a laboring MC and family man in a disarmingly objective fashion. This track is the quintessential statement of MURS the rapper, a grounded and patient perspective longing to connect. "If I don't rap every night, I might lose a fan," he raps, "So even if I got the flu I got a mic in my hand." That's the kind of diligence that has lead him to be involved in over 20 releases, both solo and collaborative, since 1996's UHB by hip-hop collective Living Legends. Latest albums This Generation (with Fashawn who will also be performing) and The Final Adventure (with producer 9th Wonder) find the 34 year-old Californian wise, intensely focused, and with a cleverer-then-ever wordplay. The energy is there and the music provides the perfect vehicle for MURS to deliver his message of renewal and love to an audience and a genre that are wilting for such a hope to believe in.

See him:
MURS, taking the stage alongsidea cast of collaborators and opening acts, offers a different kind of hip-hop show experience from some of the other major rappers who trickle through Saytow with increasing frequency. Expect positive vibes, tongue-twisted diary entries, and social and political commentary, all delivered with a fierce molten confidence and no-bullshit enthusiasm. This might be the closest many of us will ever get to the grassroots pulse of the original New York and Los Angeles rap scenes. MURS is a street scholar bringing hard-edged knowledge and constantly sharpening his eye for solutions, over tracks ranging from punk-pop stylings to simple and sparse backyard beats.

In his own words:
"Called love/it's joy and pain/but you gotta take some risk/to enjoy the game." (from "Love and Appreciate 2")
"There ain't no difference between a gang banger and Malcolm X, the same anger. Just misdirecting our neighborhoods and thinkers, so I've got to speak the truth bout the youth."
(from "Whatuptho")
"The principal said prom was no place for a queer couple/If he showed up with a boy then there'd be real trouble."
(from gay rights epic "Animal Style")