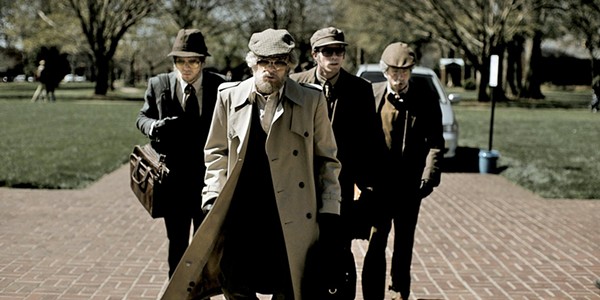 In the 2012 true-crime documentary The Imposter, filmmaker Bart Layton tells the bizarre story of a French conman who manages to infiltrate the life of a San Antonio family by making them believe he is their kidnapped son. It’s one of those stranger-than-fiction yarns that is as baffling as it is fascinating. Now, with American Animals, Layton’s first feature narrative of his career, the director/writer identifies another unusual, headline-worthy tale and constructs an unprecedented type of film that blends genres in an extremely effective way.

Based on true and possibly true events, American Animals follows four college students who planned to carry out a high-dollar heist inside the library of their school, Transylvania University in Lexington, Kentucky. The score: an assortment of rare books and manuscripts, including John James Audubon’s Birds of America and Charles Darwin’s On the Origin of Species. The players: Warren Lipka (Evan Peters) and Spencer Reinhard (Barry Keoghan), two friends who are dissatisfied with their lives and want to do something to flip the script. When Warren and Spencer realize the job is bigger than a two-man operation, they recruit fellow students Eric Borsuk (Jared Abrahamson) and Chas Allen (Blake Jenner) to round out what they, in their eyes, see as a foolproof scheme.

While this might sound like your run-of-the-mill heist movie, Layton makes sure it is not by formatting the picture in a way that hasn’t been done since 2003’s American Splendor experimented with the idea. Along with recreating the story, he also includes interviews with the real people who were involved with the crime and gets into their heads. Layton even injects his real-life subjects into the film alongside the actors who are playing them. In one scene, Peters, playing Warren, turns to the real Warren and asks, “So, this is how you remember it?”

These documentary elements work perfectly as we watch the boys attempt to meticulously plan out the robbery like they actually know what they were doing. There’s one fun scene where Layton depicts what it would be like if the guys actually pulled off the caper without a hitch — a slick, Ocean’s 11-style theft where books slide across countertops and everyone does their job flawlessly while Elvis Presley’s “A Little Less Conversation” plays in the background.

The conversations Layton is having with the real Warren, Spencer, Eric and Chas, however, are what make American Animals stand out in a film genre that can be diluted at times. Without the documentary components, the film would still be more enjoyable than a lot of movies where Hollywood assembles a crack team of beautiful misfits to steal a bag of bling. With them, Layton has discovered a new and extraordinary way of storytelling.