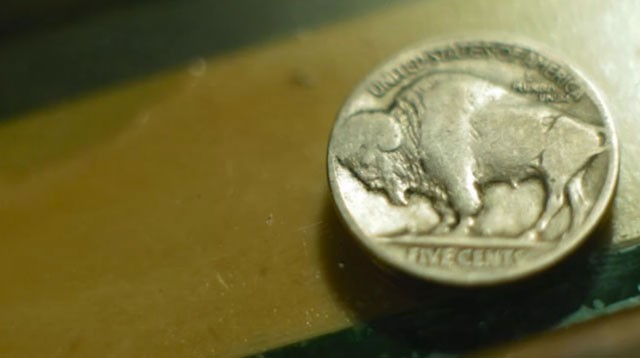 ’Tis the season to be jolly, but AtticRep has launched its seventh season with a nasty masterpiece of misanthropy. It is a gutsy move, and, to judge by the sparse audience the evening I attended, San Antonians might prefer sugar plum fairies and Hallelujah choruses to the bracing cynicism of David Mamet. Scheduling American Buffalo, which premiered in 1975 at Chicago’s Goodman Theatre, for December is not quite like declaring war on Christmas, but the play’s deliciously dark humor is more “Heh, heh, heh!” than “Ho, ho ho!” “The world is lies,” declares one of its three characters. “There is no friendship.”

If Mamet is not the greatest living American playwright, he might be the most frequently produced. The Anarchist, his latest work, just closed on Broadway, where a revival of Glengarry Glen Ross is still running. In San Antonio, Mamet’s November was November’s offering at The Cellar, and Glengarry Glen Ross will open at the Vex in February. For theater troupes eager for the gift of scintillating drama, Mamet is Santa Claus.

American Buffalo derives its title from a buffalo nickel that sets the plot — a scheme to steal a coin collection — going. But the title also suggests a vision of America as a den of thieves, in which success is dependent on one’s ability to buffalo the gullible. It all takes place one Friday, from noon to midnight, in Don’s Resale Shop, a seedy emporium of junk that production designer Jeremiah Teutsch has stocked with tacky knickknacks and broken TV sets. It is also a hangout for three broken lives. Donny, who owns the shop, is a lumbering lout whose wits are as slow as he is quick to take offense. He towers over Bobby, a jittery young junkie runt who is his part-time employee and full-time acolyte. “Breakfast is the most important meal of the day,” proclaims Donny, who dispenses bromides that he himself won’t swallow. A frequent visitor is Teach, a petty crook whose default mode is overdrive. When Teach gets wind of Donny’s plan to burglarize a man who bought a buffalo nickel from him for $90, he schemes to oust Bobby from the operation and take his place. Teach regards himself as a champion of free enterprise, which he defines as “the freedom of the individual to embark on any fucking course that he sees fit.”

Though Donny warns that: “Action talks and bullshit walks,” he and his louche cohorts multiply delusions through an endless surge of words. Mamet’s profane verbal chamber music is ably performed by David Connelly as Donny, Cristopher Boneta as Bobby, and Ross Everett Olsaver as Teach. The three form a thieving-class trio who resent more reputable citizens. Connelly was George in AtticRep’s recent production of Who’s Afraid of Virginia Woolf? and here — as there — he delivers his lines in a W. C. Fields singsong lilt that seems at odds with Mamet’s rat-a-tat rhythms. “You gotta know what you’re talking about,” says Teach. But he, Donny, and Bobby do not. They are the three wise guys who bring AtticRep’s gifts this festive season.