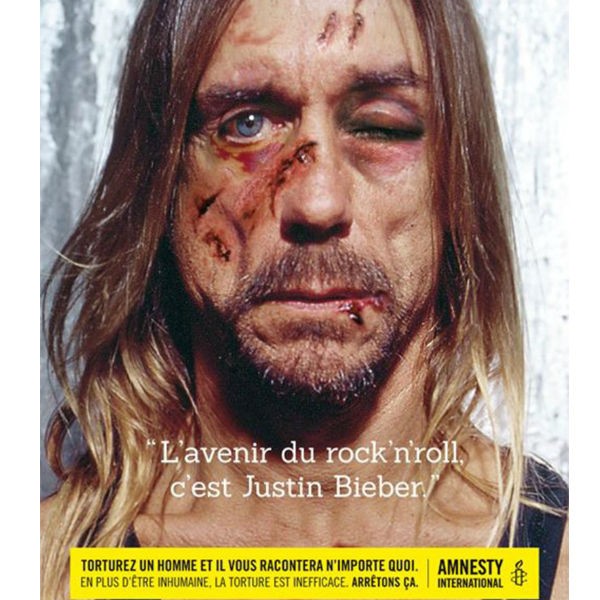 "Justin Bieber is the future of rock 'n' roll," says the French text under Iggy Pop's battered mug in an Amnesty International ad condemning torture. Amnesty International—an NGO whose mission statement is to "generate action to prevent and end grave abuses of human rights"—is stating that rock icon and proto-punk pioneer Iggy Pop wouldn't utter such lies unless suffering some Pulp Fiction basement scene shit. "Torture a man and he will tell you anything," the ad continues.

Though the blasphemy was for a good cause, Amnesty International apologized for the ad, which used Iggy Pop's likeness without his permission. Distributed in Belgium this week, the Iggy Pop image was joined by the Dalai Lama's version ("A man who does not have a Rolex watch at 50 years old has failed in his life.") and designer Karl Lagerfield's rendition ("The height of elegance is a Hawaiian shirt with flip-flops.").

On their website, Amnesty International apologized, claiming that "the statement attributed to Iggy Pop that he believes Justin Bieber is the future of rock and roll [sic] does not represent Iggy Pop’s personal opinion but was part of the creative process for this campaign and was intended to be ironic. The image has been removed."