Amon Amarth, Arch Enemy and At the Gates Brought a Tried-and-True Arsenal of Metal Sounds to San Antonio's Aztec Theatre 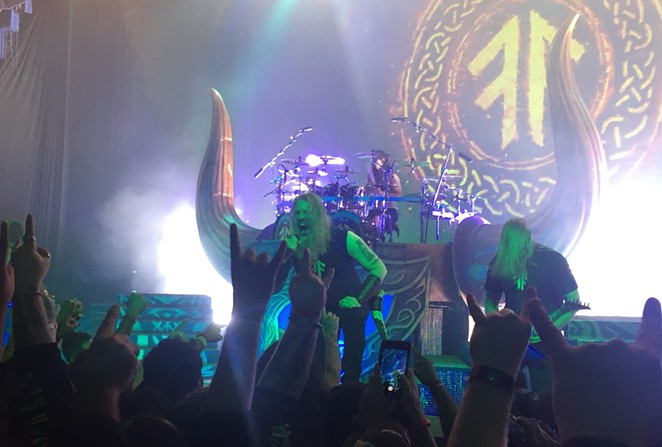 A Swedish invading force occupied the Aztec Theatre on Sunday night, as a trio of classic extreme metal acts brought to you by the letter “A” — plus a less familiar opener — delivered polished, professional performances.

Though the extreme faction dominates the modern metal scene, Amon Amarth, Arch Enemy and At the Gates reminded listeners that classic sounds and styles, particularly from the ’80s, remain an essential part of metal’s DNA. This thread ran through all three of the top-billed bands. Despite their incessant use of harsh vocals, not one blast beat thundred through the venue all night.

After a brief set from the proto-metal inspired Grand Magus, At the Gates took the stage. The band left a lasting mark on metal in the mid-’90s with the classic Slaughter Of The Soul LP, the sound of which almost entirely defined the genre of melodic death metal. At the Gates vocalist Tomas Lindgren noted that the band played this venue a year ago. That bill featured Behemoth and Wolves in the Throne Room, an adventurous and eclectic bill. Sunday night was almost the opposite, piling on tried-and-true champions from a single genre of metal.

At the Gates owes a lot to ’80s thrash metal, particularly the anthemic qualities of Slayer and the riff style of Anthrax. Unlike Amon Amarth or Arch Enemy, At the Gates exists in a world where hardcore and post-hardcore happened, and the band puts the anthemic shrieks born of that style to good use. Even the quick snare count offs felt indebted to punk rock.

The band, who hit the stage with “To Drink from The Night Itself,” a song from its most recent album, struck a careful balance between new and old without losing its obvious fondness for taped intros and interludes. At the Gates was also careful to include gems from Slaughter (“Blinded By Fear,” “Cold”), but were confident enough to devote more than half the set to material from their “reunion” era, which is still going strong.

Arch Enemy looked a little farther backward for its sound. Vocalist Alyssa White-Gluz prowled the stage in a leather get-up that recalls Rob Halford. Of the frontpeople, she was easily the most charismatic, mixing a sense of menace with joyful abandon as she pumped up the crowd.

Guitarists Michael Amott and Jeff Loomis — both metal legends via stints in Carcass and Nevermore, respectively — played like seasoned pros, easily killing the dual harmony lead lines that are a core part of the Arch Enemy sound. Their material was less infectious than that of the bands appearing on either side. That meaning that they needed to do some dazzling to earn their keep, and Loomis and Amott were up to the job.

Arch Enemy concentrated on more recent music, with five of their eight songs pulled from their last two records. That made sense. White-Gluz joined the band in 2014 and, despite having a long track record before her arrival, her presence has re-energized the band and given it a — dare we say? — youthful vitality. Hitting the stage with “The World Is Yours” — which also sums up the band’s mantra — they had no trouble whipping the crowd into a frenzy.

Of particular note was the gentleman who bloodied his nose in the enthusiastic pit then used a tampon to stanch the bleeding. At that moment, he was all of us. Perhaps White-Gluz would have dedicated “The Eagle Flies Alone” to him had she known.

The tightly paced show was a marvel of roadie precision, with the longest break coming before Amon Amarth’s headlining set. They took over the stage, now cleared to reveal that the drum riser was a giant Viking helmet. Yeah, kids. Anyone who doubted what was coming could no longer remain in denial.

The band hit the stage with “Raven’s Flight,” one of four new songs from their most recent record, Berzerker. Vocalist Johan Hegg, a man who could easily win a Dress Up Like Lars Ulrich’s Dad Contest, led the band with a flair appropriate for the music. A bit contemplative with a touch of the ancient wizardry and, oh yeah… Vikings!

Even so, the band considers itself part of the melodic death metal scene, not wanting to be described as “Viking metal.” Call it what you will, but these guys bring the Vikings. The most obvious influence is Iron Maiden, and not just musically. As the set progressed, audience members were treated to smoke machines, two huge dudes sword fighting, and the previously mentioned enormous helmet. The giant prop’s eye holes also changed colors, at one point displaying what appeared to be a fireplace screen saver. And, naturally, the set concluded with Hegg taking on an inflatable dragon, ably assisted by a giant prop hammer straight out of Super Smash Bros.

Cheesy? Yes. But it was also fun, and the crowd loved it. Hegg led the proceedings with a twinkle in his eye that befit the staging. Amon Amarth’s music has a catchy, memorable quality that allows it to transcend, at times, the band’s one-note songwriting style. The set built to a climax with “Raise Your Horns” — about drinking, natch — and lumbered across the finish line with “The Pursuit Of Vikings” and “Twilight Of The Thunder God.”

As the audience piled out, it was clear they had gotten their money’s worth. Extreme metal may lie on the cutting edge of the scene, but this night was about re-visiting the classics, even if they were dressed up in different clothes. You can’t argue with history. Certainly, the nostalgia-obsessed metal scene cannot. Or is that won’t?