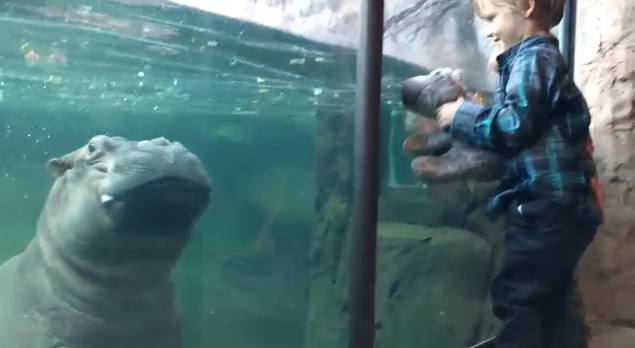 The San Antonio Zoo has a new 2-year-old hippo — and he's a big boy.

The 1,200 pound, “curious, very adventurous” youngster made his debut at the zoo’s Africa Live! exhibit this morning.

He arrived last month, and doesn't have a name yet. The toddler moved to San Antonio from the ABQ BioPark Zoo in Albuquerque, New Mexico, in early September. It's the first time in 16 years that the zoo has a baby hippopotamus in its care.

His splashing debut is a stepping stone in getting him fully acclimated in his new home, where the 2-year-old has some family history — he's the son of Karen, the last young hippo the zoo had in their care. Caretakers plan to introduce the new hippo to his grandmother, Uma, who is Karen's mother and a long-time resident of the zoo.

Karen was transferred to Albuquerque a few years ago, and gave birth to the new hippo (who went by the name "Brynn" in Albuquerque) in 2015. Karen is still living in the Albuquerque zoo with Brynn's father, Moe. Brynn's sister, Boopie, is currently living in Dallas.

Karen's beloved father, Tumbo, lived in the San Antonio Zoo until he was euthanized just before his 43rd birthday in May after weeks of fighting an illness. Tumbo was famous for gracing the cover of National Geographic magazine in 2016.