During a phone interview with me today, director Breck Eisner spoke about his new film The Crazies, a remake of the 1973 horror film of the same name by George A. Romero. In the film, a group of small town folk in Iowa are infected by a virus that causes them to become aggressive psychopaths. Breck, who is the son of former Walt Disney CEO Michael Eisner, also talked about why he decided the movie needed to be remade and whether or not he thinks he could survive a global pandemic if one were ever to happen. 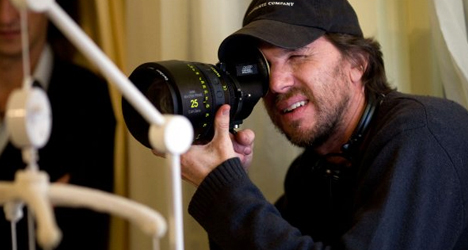 One could say that the reason we're seeing so many horror remakes is because Hollywood is running out of ideas. Original scripts are a rarity in the industry. Would you disagree with that assertion?

You know, I totally understand the frustration with all these remakes. I would share that same frustration if every remake was a piece of junk. If a remake is great and people are making them for a reason and there's something to tell, then go for it. But if a remake is just there to exploit a property and make money it's no longer a reason to make a movie. With The Crazies, I saw a movie that had relevance when it was first made in '73 and a relevance that existed today. It's a different world, a totally different audience, and there are still things to say about the core conflict that makes the original work. For me, the idea of writing off all remakes is wrong. If it's good then it's no different than remaking a book or a graphic novel. Do it because there is a purpose.

Why do you think directors like George A. Romero and Wes Craven are open to the idea of their movies being recreated? I know you've said in a past interview that you would only remake a movie if you saw a flaw in the original. Do you think they see some of those flaws, too?

I think the flaw — if you can call it that — of `1973's` The Crazies is a lack of resources. Obviously, having more money doesn't mean you are going to have a better movie, but in a movie like The Crazies it's a movie about the government taking over a town. When scaled to that, it's kind of expensive if you have the desire to do it right. Romero was very limited in what he could do. One of the things I wanted to push against and try to scale up was to depict the military in a realistic way. In terms of their openness to make movies, I can talk specifically about Romero. He owns the rights to this movie. He benefits financially from selling it. It was his decision to allow the remake to happen, which gave me confidence in getting into this project. His point of view on it is this: here it is guys, be true to the original but I want to see your version of it. This is your movie. Go ahead and remake it.

While The Crazies has some gory moments, I wouldn't necessarily say it focused on that element like a lot of horror movies do these days. Was not overdoing the gore something you did intentionally?

For me I just wanted to make a movie that I would want to see and the style of horror that I like. I certainly recognize that there are gorier movies out there. What I like in horror is a strong concept and good characters that you can invest in so when things start going horrifically wrong for them you have an emotional connection to them. My thought on gore is that it should service the movie itself. It's fine when it's in a scene where it's appropriate. But don't put gore in a movie for gore's sake. Don't just make it graphic because you think that's what people want.

You've said in a past interview that the horror genre is something you hope you can keep doing. You said you're not mucho of a romantic comedy type of guy. What's the last romantic comedy you saw?

(Laughs) Oh, gosh, what is the last romantic comedy I saw? Is Wedding Crashers a romantic comedy? I love comedy. I love what the Coen Brothers do and I love comedy with a male point of view. If I was going to do a romantic comedy it would have to have some kind of dark comic take on it. But I love movies and appreciate them so to get the opportunity to make a good one, I would certainly take it.

Do you personally think you would be able to survive something apocalyptic like what we see in The Crazies?

I would absolutely go down in the first page of the script. I would like to think I would survive but I think I would be one of those guys that didn't make it out alive.

What is something that drives you crazy about the film industry? About life in general?

What drives me crazy in the film industry is just the uncertainty of it. You're never employed. You're always looking for your next job. It's a really unstable life. It can drive you mad. In life: traffic. Sometimes traffic can push me to the brink of insanity.