An Ironic Guilty Pleasure: a Review of Cruel Intentions: The ’90s Musical 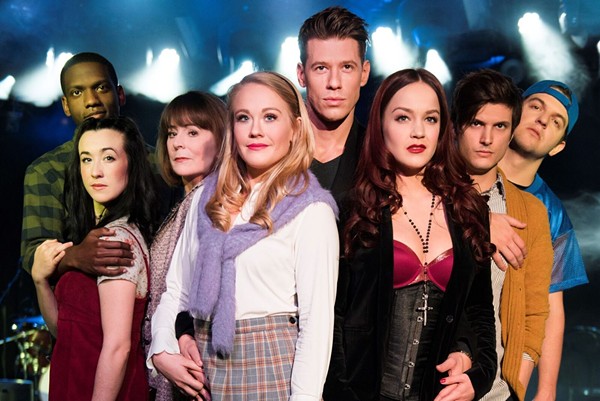 I’ll confess that my expectations for Cruel Intentions: The ’90s Musical couldn’t have been lower: that’d it be a trashy, gimmicky jukebox musical of an iconic, cult film.

Turns out it’s a rather clever, trashy, gimmicky jukebox musical of a cult film, with an arch and ironic sensibility that particularly propels its first act. In fact, it takes about 25 minutes for the musical to find its (boy-band) groove, and when it does, it’s with the Backstreet Boys’ “I Want It That Way,” here cooed by two horny, gyrating gay guys. Suddenly, the instruction “that way” takes on an entirely new meaning — I’ll refer to it coyly by the Latin phrase a tergo, to evade the Current’s censors — and the moment is hilarious and smart. By queering this putatively heterosexual song, the musical deconstructs the entire edifice of the boy-band band phenomenon as well as the stupidity of America in the ’90s, the stupidity of America now and the stupidity of us all in watching Cruel Intentions. It’s the most winking moment I’ve seen in the theater in ages (in every sense).

If only the guilty pleasures could last — but the second act (which adheres a bit too much to the script of the film) takes a turn toward earnestness and muddles the radical queerness of the first. The musical tries to have it both ways: it’s both a commentary on social cruelty among the moneyed classes and a commentary on the pop culture landscape of the Clinton era. But it really needs to pick one or the other in order to fully succeed. The touring production at the Majestic Theatre filled the space with plenty of sound and even some stadium lighting, but I suspect a smaller venue more successfully showcases the piece. (The New York run was staged at the off-off-Broadway cabaret space Le Poisson Rouge.) The touring cast is strong (particularly Betsy Stewart channeling Reese Witherspoon and Taylor Pearlstein as Sarah Michelle Gellar, sort of), and the witty choreography by Jennifer Weber pops to music by *NSYNC, R.E.M, Christina Aguilera and more. I don’t really understand the logistics of the tour — two weeks in Chicago but just a single Tuesday in San Antonio? — but I was happy to catch this curious production before it said “Bye Bye Bye.”