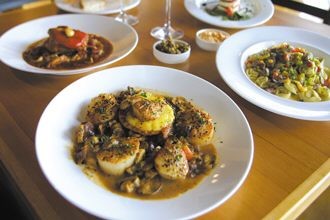 A tiny lemon tart complements pan-seared scallops at Carmine’s in Schertz.Carmine's 3820 FM 3009 Shertz 658-8822 11am-9pm Tue-Fri, 4-10pm Sat, noon-8pm Sun Credit cards
Entrees: $11.49-$23.95 Accessible http://www.Artpace.org Though we haven't met, I have exchanged several emails with Phil Sprio, chef/owner of Schertz's Carmine's, trying to figure out why a guy who, with his brother, owned a successful restaurant (also Carmine's) in Albany would want to come to small-town Texas. Phil claims to have decided on Texas as a better place to raise his young sons. He also talked a good line about fusing fine Italian and classic Italian-American dining with more casual Texas sensibilities, and I was predisposed to be favorably impressed by his cuisine. Especially with the Sicilian-grandparent creds and the promise of 70-percent European (read: not red sauce) recipes. My predisposition was blunted somewhat by the observation that Chef barely set foot in the kitchen during a mid-week visit, preferring instead to schmooze among guests. Maybe this is audience-building. Or maybe he was saving himself for the weekend.

So how did the working crew do? You can actually check out their routine for yourself by asking for the counter that faces the (very) bright and gleaming kitchen; it might be of interest, briefly, but I'm not sure I'd want to spend an evening there. From the vantage point of a regular table, and in tandem with a mostly efficient server, they generally did very well. Though of course there are quibbles.

The first has to do with the Tuscan bread and associated spreads served shortly after seating. The bread is fine enough but the spreads, one tasting of pimento cheese and another of simply chopped olives, seem odd in the restaurant's upscale setting. The second is equally minor: the portobello and eggplant napoleon, beautifully glazed and reglazed with tomato and balsamic and layered with roasted red-bell peppers, was very intensely flavored but undercooked, making for textures too resistant to both tooth and fork.

The texture of the mozzarella and prosciutto spiedino, on the other hand, a dish that can take many traditional forms, cannot be called into question: the dipped, crumbed, and fried sandwich of Tuscan bread stuffed with a sliced mozzarella and prosciutto roll (they make their own mozzarella), was easy to cut, just as easy to eat. Its marinara sauce accompaniment was zingy and bright-we loved it. But the size! What's with this, America? This alleged appetizer could have fed dozens of Darfurians. I felt guilty eating even a quarter of it.

Carmine's wine list yields a kind of guilty pleasure due to pricing: It isn't bargain-basement, but it's well laid out in categories such as delightful and elegant for the reds. I can easily be had by elegant so we picked an Antinori P'ppoli from that section and nursed it throughout the evening. It worked with the napoleon, but was spectacular with the split pasta primo we ordered: gnocchi alla cuccina (sic). This is unpretentious Italian with just the right amount of pretense: mushrooms, onion, sundried tomatoes, chianti, cream and impeccable nuggets of just-al-dente-enough gnocchi. Best in town. Best in most towns, for that matter.

The wine continued to work with the entrees, but the entrees did require some work on our part. I expected that the Hill Country Pork Chops would be a more rustic homage to the chef's adopted home, but frankly, it was too sophisticated, both discreetly and discretely classy in its assembly of mushrooms, chunky sausage, and potatoes, with both white wine and a brown sauce, all served over a brace of basically pedestrian, boneless chops. It needed more moxie. The peppery, pan-seared scallops, a substitute for the inventive-sounding monkfish picatta that we were informed was unavailable several minutes after ordering it (the only service glitch), were said to be served with lemon tart, and we couldn't help but think tart lemon instead. Not a typo: we got scallops with a mixture of mushrooms, plum tomato, scallions, and sherry - plus, yes, a tiny lemon tart. And after we got over the anomaly, the conceit actually worked well: sweet-tart with mellow-briny. But this observation: the sherry was too dominant, the broth too thin, two problems a little more reduction would have solved. Nevertheless, try it.

Since take-out is becoming more and more a part of contemporary life, I often order a dish or two to take home, just to see how they hold up. This night it was the specialty-list Chicken Carmine's, a plate that promised to combine the best of both old and new worlds. Considering that the dish is based on basically benign boneless chicken breasts, it ends up being rewardingly burly, the result of a crafty combination of herbs, wine, tomatoes, scallions, and more. Yet, despite Chef Sprio's contention that Italian food is not about garlic and red sauce, it's also about flavor, and I could have used more of the former in the garlic smashed potatoes. And the very good, but these days also ordinary, sautéed vegetables were just that: chunky but competently common.

Though our server found it hard to believe, we did manage to consume a totally typical dessert, the house-made cannoli. It was a simple yet sophisticated version of this Sicilian classic and a suitable homage to the grandparents and their Ellis Island rite of passage. So when all is said and done, I'm still disposed to like this place, and if you're up for a jaunt to Schertz, I suggest you give it a try. True, I don't yet find that spark that would say Italian, Italian-American, and casual Texas Hill Country have come together in the kitchen, but maybe they're still in courtship mode. Or maybe the union was never meant to be.