An Out of Shape Reporter Goes to the Gym 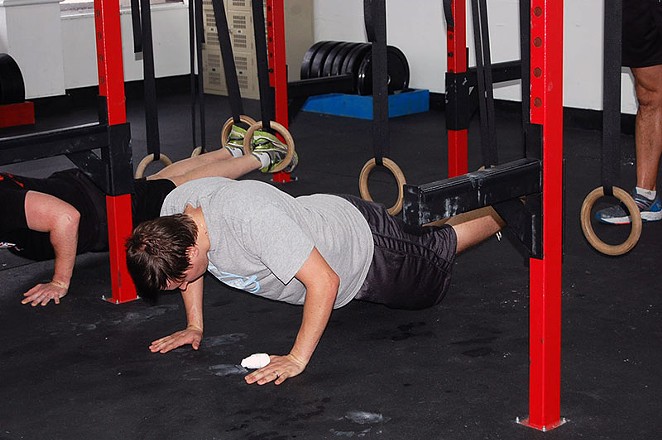 Here's the first thought I had after sitting down to write a first-person story on attending a cross training class:

"How am I going to write this if I can't lift my arms to the keyboard?"

This is a real problem. My job last week was to attend a class at a local gym and to write about it. I knew that I had the technical skills to make that happen. I never anticipated being physically unable to do so.

Let me preface my description of this experience by saying I'm not a fitness enthusiast — something you've probably guessed from the previous paragraphs.

The extent of my cardiovascular exertion is more or less limited to lifting 12 ounces at a time, playing pickup basketball and jogging a few guilt-fueled laps around the track once or twice per month. I haven't lifted weights in years, and I certainly haven't worked out with a group of other people in just as long.

So when I got this assignment, the words that came out of my mouth were "Yeah, sure. That could be fun." The words in my head were decidedly different, and were mostly strewn together by expletives.

But I am a good soldier, and I enjoy gainful employment, so I agreed. Besides, my wife goes to cross-training classes several times per week. She swears by it, and she's tried to bring me along for quite some time.

So I did. I took two one-hour group classes at TejasFit, a small, unassuming gym on Broadway Street. I went to the early morning sessions, the bright fluorescents casting light onto the normally busy street.

If the gym is a beacon of fitness, then Alexander Hutchison is its lighthouse keeper. The owner and main coach at TejasFit, Hutchison is an imposing figure. He's a big, fit, bald dude, with the demeanor and physique of someone you'd want with you during the zombie apocalypse. I am not that person. I would quickly be disemboweled, or left behind by more savvy and able-bodied people. I would not blame them for this.

[SLIDESHOW: 15 San Antonio Crossfitters Who Are Totally Crushing It on Instagram]

Hutchison started us off easy, which imbued me with a false confidence about my physical abilities. After tossing a medicine ball for a few minutes, I felt like Charles Atlas.

The feeling didn't last. For the rest of the session I bumbled around the gym like Mr. Magoo -— a comparison that describes both my athletic ability and general gym acumen. I was That Guy -— tripping over my jump rope and making uncomfortable grunts through activities that others seemed to find routine.

Despite this, Hutchison and my fellow gym-mates couldn't have been kinder or more helpful to me. When I caught my breath enough to ask a question, someone answered it. When my form was off during a weight lift, Hutchison gave me advice. When I had trouble lifting the bare minimum bench press, people cheered me on. My frail little reporter arms strained to bring the bar to its apex, but when they did, people clapped. I smiled, said thanks, and focused on not puking.

After the sessions, I realized that those seeking a full-body workout would get their money's worth. It wasn't until the day after that I fully understood what I'd done.

I've never been in a boxing match before. The only fight I've ever had was in the sixth grade, when an older kid punched me in the temple at a shoe store (I don't remember why, but it was probably over something significant). That hurt, but it wasn't much of a fight. I was fine.

On the other hand, the way I felt after two sessions at TejasFit couldn't have been much different from the aftermath of a genuine ass kicking.

Some of the soreness I expected. My abs, so steadfastly protected from exposure by years of cheap six packs, protested with every movement. My shoulder protested when I held a shampoo bottle aloft for the briefest of moments in the shower. After audibly groaning about how tough it was to lift my backpack, my wife clucked at my protestations.

"You're not in my body!" I retorted, unable to concoct anything clever, or apparently logical.

But of course, she was right. She typically is. I was being melodramatic, and my pain is proof of my woeful physical condition. I need to fix that.

I don't know if I'll keep going to TejasFit or another gym like it. But if I do, I know at least that I'll get results. It's hard to know why anyone would put themselves through so much work for anything less.