Analog Is Not Dead 6: Estate Sales, A Night Out With Mondo Nation, Fashion Friday and More

Hello all, brain here, Analog is not dead post number 6.  I went crazy overboard with the estate sales in this one, but there were some notable houses that I went to.  Again I’m shooting a roll of film and just commenting on what happened during shooting the 36 exposures of fujipro400h 35mm film.  I’m really fascinated by the objects strewn all over the place and the fact that people feel no ill vibes by going through some dead people’s belongings.  I get kinda weirded out, but I did buy some old woman's canon AE-1 and started photographing with it, so I’m pretty much in the same boat as all those other folks.

I’m not using flash like I normally use, which makes it much more difficult but some of the natural lighting in these rooms makes for interesting photos, or at least that’s what I think.

I usually do a better job of not getting myself in the mirror.  If you need any insect spray or some dead dude's laundry detergent, you can sometimes buy it.  Albeit your clothes may become haunted if you use it.

I don’t think I would buy furniture from these places, or maybe just the ones that give me the heebee geebee vibes.  That only happens sometimes.  It feels like the deceased owners of the house are looking down and see all these strangers wandering through their belongings and memories.

Sometimes they have rooms closed off with signs or like this one with two strips of masking tape.  I don’t know what it is that I notice these things but I just do .

The era when these houses were built lends to some really cool furniture that I would love to buy or have in my house.

This was taken in Boerne at the Borges fest. My brother was in town and we took my nephew cause he loves knights and swords and there was bound to be both of those there.  I saw this guys t-shirt and it reminded me of a graphic I had silk screened a while back ..

I thought it would be fun to volunteer at a fashion event,  specifically Fashion Friday on Broadway.  I was pretty much the event's bitch and helped out with setting up clothes racks, to setting up backdrop for photos.  The air conditioning was out or half out, so it was hot inside and it kinda sucked.  The free beer helped.  I saw this girl, who was incidentally one of the designers at the fashion show and she was nice enough to let me take her picture against this green wall.  She gave me one of her business cards which was a note card with her info handwritten in ink which I thought was awesome.  I’m going to get cards printed like that for my next business card.  thanks for the inspiration. :)

There was a interesting mix of people at this event, so I was happy to be there to document it.  I’m hoping to print this in the darkroom to add to my series I have been working on.  If you go to my website brainold.com and look under c-41 prints you will see what I’m talking about.

So I was put in charge of being the spotlight operator during the fashion show.  I dunno why they chose me, cause I was the only guy helping out?  I usually work events as part of the San Antonio Events team, but I was just volunteering this event and got this shot of Brandy as she was shooting models coming down the runway .i can now add runway spotlight operator to my photo resume, I guess.

Ok, so you may wonder why the photos keep bouncing back n forth between houses and people?  Well, the whole gist of this blog is that I take a 36 exposure roll of either color or b/w film and take photos.  I then tell a story about what happened during the course of shooting the roll of film ..so yeah that’s why the photos are in kinda random order.

I’m still shooting at estate sales when I have the chance to.  I really liked the fluorescent orange price tags on all these housewares .

My friend Edwin tagged along with me on this particular estate sale journey and told me about this room with weird dolls.  I had to position the little doggie next to the box.  Usually I don’t move things around, but this was an exception.  Did you notice more of the fluorescent orange tags on everything..??

More price tags on everything.  Sometimes it’s a bitch to get these shots, to you guys the house is empty, but there’s loads of people walking around, just takes some patience.

this picture is a perfect example of what happens when you wait too long to get a shot.  Although I still love it, it would have been much radder if I had gotten it 2 seconds earlier.

Funny thing about this room,  to the right, not pictured was this light stimulating booth.  I had no idea what it did but it was for sale.  It kinda looked like an iron maiden box but I couldn’t open it to see what was inside.

I got some vintage Sennheiser head phones at this house, and a whole box of kodachrome slides for $3.  I truly believe buying old photographs is going to be a thing that will soon be gone because of digital photography.

Who prints out photos from their digital camera these days?

This is in the garage of the same house as the previous pics above.  I bought an old clock because I cancelled my cable and didn’t have a cable box to tell me what time it was anymore.  I like the old analog clock way better.

This was a house party my friend took me to.  There was a giant slide to the right that had a pool of water that you slid into.

This band is called you and me underwater, couldn’t find a facebook page for them sorry dudes.

This is Jeremiah Bredvad. I’m super horrible about describing people’s musical styles.  So I asked him to describe himself and his music and Jeremiah said, “I would say we are both genuine ,my music and I. We don't try to be something or someone we're not.  Familiar and new.”

Jordan and her band Dirty Genez.  I’m pretty sure you would like her music if you like a guitar and a sultry woman’s voice singing.

Okay so I ventured out to Essentials Studio for another lineup of great bands put together by Mondo Nation.   So I saw this guy in the corner with a fashion magazine, sketching and writing all over it.  This really appealed to me because of the Bust House Zines I have been making with my friends Vincent and Boone from Austin.  I snapped this photo cause it’s something that I would probably do,  and I hope to collaborate on some Bust House contributions in the near future.  By the way his name is Dorian and here’s his artwork ..

Still at the Mondo nation showcase, I saw this guy wearing this shirt, I’m not sure what it means or if it’s a band or it describes how he smells.  but I really like it.  I used to make shirts like this all the time with iron on letters.

I did a photo art show a while back at Fl!ght Gallery entitled “Club Foot” it consisted of photographs similar to this one, I am forever looking at the floor when I’m at places and see money, weird footwear, mangled toes and feet and that’s how I noticed this girl's shoes

I remember when my brothers and I used to cheat the rubix cube and take it apart because we could never be like those videos where the guy solves it in 2 minutes.  Jerks. 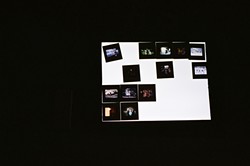 Well that’s post #6, I hope you enjoyed the photos.  This is my little portable light table at my apt with some of the Kodachrome slides I bought from the estate sale earlier in this post.  They say Kodachrome slides have the equivalent information of 20 Megapixels.  pretty cool.  this makes me want to shoot slide film.