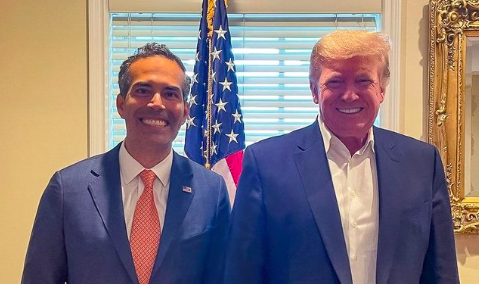 No one should be surprised Donald Trump endorsed embattled Texas Attorney General Ken Paxton over George P. Bush, the Texas land commissioner who's also gunning to be the state's top law-enforcement official.

Trump has wielded his power as Republican kingmaker to reward those who push the lie that he won the 2020 election and exact revenge on a long list of enemies. Indeed, Bush is only the latest Republican sycophant to be rejected as a suitor in Trump's game of Kiss the Ring.

Of course, the failure to grab Trump's endorsement was through no lack of trying on Bush's part.

After all, the AG aspirant was the only well-known member of the Bush political dynasty to endorse Trump in 2016. And you can't exactly blame the rest of the family for staying away, given the repeated insults Trump has lobbed their way.

But George P. Bush was apparently willing to put aside family matters as he courted Trump's blessing. He reportedly spoke to the former reality show star multiple times about the race and even visited him earlier this month at his New Jersey golf club.

"The left’s out of control policies are eroding the fabric of our nation," Bush tweeted in Trumpian voice, throwing in a photo of himself grinning next to the Orange One. "It was great to see Pres. Trump today & discuss how we must come together as a party to restore America First Priorities. I appreciate his friendship & kind words as we work together to Keep America Great."

The left’s out of control policies are eroding the fabric of our nation. It was great to see Pres. Trump today & discuss how we must come together as a party to restore America First Priorities. I appreciate his friendship & kind words as we work together to Keep America Great. pic.twitter.com/pEMuCUOCBi

But for all Bush's eagerness to land a powerful ally, his repeated wet smacks to Trump's backside suggests he's not a particularly savvy political observer. Or a good judge of human nature.

What should be obvious by now is that Trump rewards those who display unconditional loyalty. And, for all Paxton's legal baggage — remember the whistleblowers, the securities fraud charges and the FBI probe? — the Texas AG has certainly displayed the latter.

In addition to serving as co-chair of the organization Lawyers for Trump, Paxton last year filed the widely ridiculed — and ultimately rejected — lawsuit asking the U.S. Supreme Court to overturn the former president's loss in four battleground states.

What's more, the current AG spoke at the Washington rally that preceded the January 6 insurrection, then erroneously claimed in a tweet that the rioters weren't Trump supporters. Talk about a chip off the old, orange block!

The reality is George P. Bush offers little of value to Trump. To be sure, the former president's statement that the land commissioner was "the only Bush that got it right" rings less of sincere appreciation than it does a way to deal another insult to the Bush family.

In other words: George P. Bush got played.