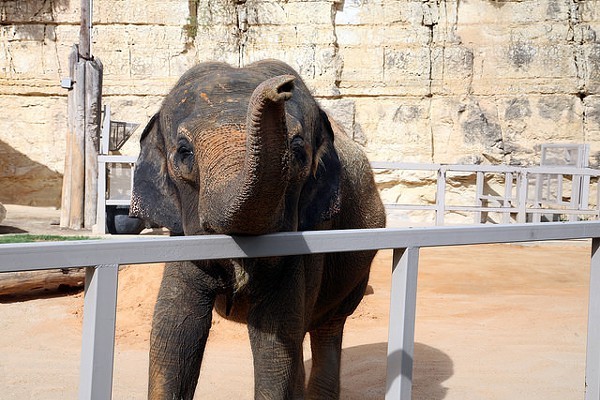 The Animal Legal Defense Fund (ALDF) made good on its promise to sue the San Antonio Zoo over Lucky, an Asian elephant animal right groups want removed from the zoo and transported to an elephant sanctuary in Tennessee.

The lawsuit alleges the zoo is violating the Endangered Species Act by confining the elephant in isolation (its last companion was Boo, who was aggressive and euthanized in 2013); by providing insufficient space; by not providing adequate shelter; and for leaving inappropriate substrate on the exhibit floor. According to the ALDF, these conditions injure Lucky both physically and psychologically.

“More and more zoos have admitted that they cannot meet elephants’ complex needs and have closed their elephant exhibits,” Stephen Wells, executive director of ALDF, says in a press release. “Instead of acknowledging the obvious — that it cannot meet Lucky’s needs — the San Antonio Zoo makes excuses about why it is unwilling to allow her to have a better life. We hope the zoo will choose to let Lucky live out her days in the more natural environment of a sanctuary, rather than stand around waiting to die where she is now.”

The San Antonio Zoo stands by its treatment of Lucky, often criticizing animal rights organizations of generating "an onslaught of inaccurate information."

"Some of the activists have an anti-zoo agenda; they don't want zoos, period," San Antonio Zoo CEO and Executive Director Tim Morrow said in September. "I feel it's a bit shortsighted and not looking deep into what's really happening in the world ... People that work here love animals. Critics also love animals."

The ALDF wants Lucky moved to the elephant sanctuary in Tennessee, and the zoo maintains that Lucky is too old to be moved and could die during the process, which the ALDF disputes, arguing that an Asian elephant's average lifespan is 70.

Morrow says Lucky, who is 55 and a half years old, has outlived the average life span by nine years. In the wild, the Smithsonian National Zoological Park says elephants can live to be 60, though most don't make it that long. Typically, captive elephants do not live as long as their wild counterparts, according to National Geographic.

"She's like your great-grandma — like 90 — in people years. So that stress alone we think could have really bad consequences for her up to and possibly including dying," Morrow said in September. "At her age and her size, even if she made it to another location, she'd have to go through the process of fitting into a herd since she'd have to prove herself in the pecking order and we don't know if she'd survive that."

However, animal rights groups aren't the only demographic concerned about Lucky. North Side City Councilman Joe Krier wrote a letter to Morrow in August calling on the zoo, the ALDF and One World Conservation, a nonprofit advocating against the zoo's stance on keeping Lucky since 2008, to mediate the dispute, the San Antonio Express-News reported. The Express-News editorial board, which has supported the zoo's stance in the past, agreed with Krier in September, urging the zoo to go to mediation.

According to ALDF, the zoo declined, as it has done before, to come to the table, prompting the lawsuit, which you can read here: