The Texas couple with the pickup truck with the "F– TRUMP" decal that made headlines last year is in the spotlight once again. Karen Fonseca has taken to GoFundMe to raise money for her husband's jail bond after he was arrested while driving the truck.

Miguel Fonseca was pulled over in Sugar Land on Sunday. Sugar Land Police Department spokesman Doug Adolph told reporters that this was due to the truck not having a front license plate, though Karen Fonseca said it was because the tint on the truck was too dark by legal standards.

The officer noticed that Miguel Fonseca had two outstanding warrants, one for speeding and another for failure to appear. The officer asked the man to exit the truck, but he allegedly refused and had to be forcibly removed. Now he faces a charge of resisting arrest, too.

Miguel Fonseca is being held on a $1,000 bond, which Karen Fonseca started a GoFundMe to help pay. Here's the campaign summary in full:


My husband was JUST ARRESTED because of our window tint being 2 shades too dark. He was followed by 3 white police officers that were in our neighborhood due to an unrelated dispute. The police saw our truck, followed my husband some ways, and pulled him over about 7 miles from the house. My husband was told the window tiny was 2 shades too dark. He was then taken into custody for a 7 year old unpaid ticket. ALSO the police added a criminal charge to his unpaid ticket, RESISTING ARREST! They gave him resisting arrest because he was on the phone with me telling me to get the truck. He told the officers he is okay with me getting the truck. They said he was resisting, he said no Im just telling her where to come get the truck since she needs it for the kids. We have a handicap tag my son is permanently handicapped, I told this to the officer and he could have easily given me the keys for me to have transportation for my kids. Instead, now I am faced with $189.95 in towing fees and a $750 bond amount on his new "criminal" charge! The tickets he is able to pay off with money he has set aside. He is facing magristrate in the morning and his bond may be lowered, raised, or remain the same. We really need your help in getting him out and getting our truck back!


As of Tuesday afternoon, just $108 had been raised. But the fundraiser has received plenty of comments criticizing the Fonsecas.

The couple's anti-Trump truck first made headlines last November when Fort Bend County Sheriff Troy Nehls shared a photo of the decal asking for the owner to come forward so the decal could be modified (and while also threatening disorderly conduct charges). 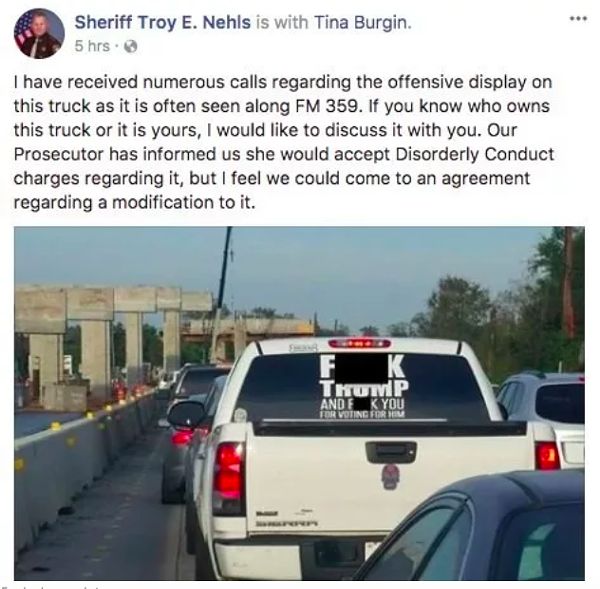 Karen Fonseca was soon arrested for fraudulent possession or use of identifying information. That same month, the Fonsecas had added a "F– Troy Nehls" decal to their truck.

Karen Fonseca is expected to appear in court on fraud charges at the end of the month.