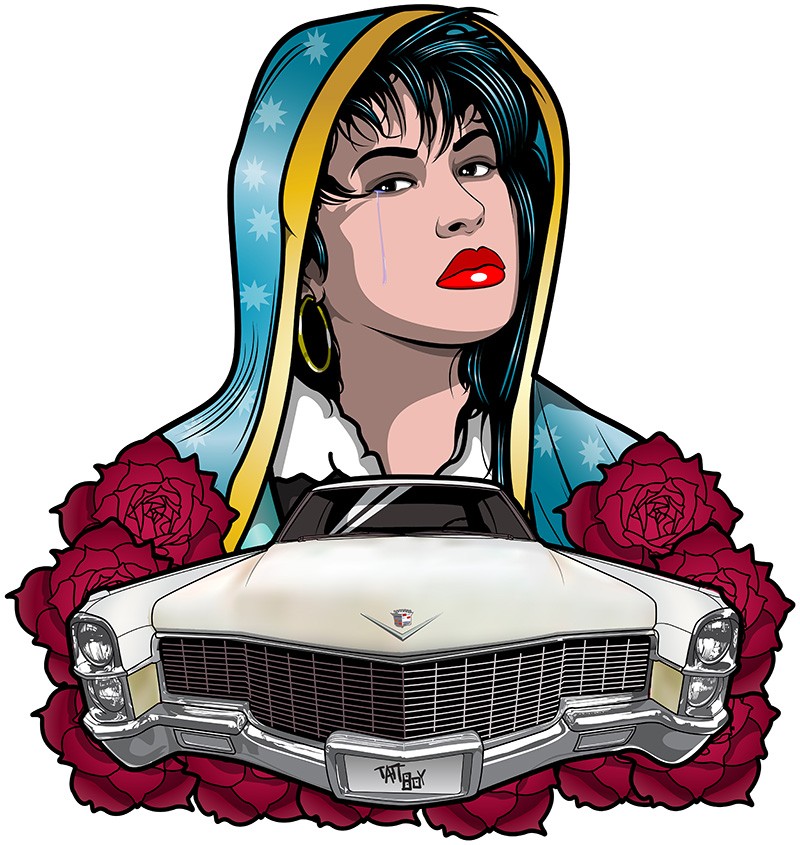 Richard Harris, who researches the relationship between media and memory at Kansas State University, describes the blurring of fact and biopic fiction in the brain.

"Research on this kind of thing shows that dramatic accounts of real events — in people's memory — get very muddled in the memories of the real event," Harris said. "It's hard to keep the details straight. For people not old enough to remember the events, that movie becomes reality in their memories."

A quick experiment in memory: Picture Selena at the 1994 Grammys, trophy for Best Mexican-American Album in hand. Bright red lipstick, a tower of hair, shimmering white neck strap dress — are you thinking of Selena or J-Lo as Selena?

Immediately after Selena's murder, a culture of mourning swept over San Antonio. Vigils popped up at South Park Mall and Sunken Garden Theatre. At San Fernando Cathedral, a bilingual morning mass was held for the fallen star, complete with mariachi choir.

"People were asking for images. It was a blur. It was so tragic and disheartening, I didn't know what to do," Rendon told the San Antonio Current. "You just want to grieve for a while. And it was hard because I was getting approached by newspapers and people wanting interviews, people wanting images."

Along with mourning came the economic impact of remembering Selena. Rendon sent out photos that made their way to People En Español and The Smithsonian. In San Antonio, supporters flocked to the Selena Etc. boutique on Broadway (now a CD Exchange), picking up goods from the Quintanillas' salon and clothing store.

Shirts and record sales skyrocketed in the morbid, reliable sales bump that eerily accompanies celebrity death. Released in July of 1995, Selena's crossover English album Dreaming of You was the first posthumous release to top the Billboard chart, selling a white-hot 175,000 copies on its first day.

Selena's bright career and tragic death at 23 offered a form of immortality in pop culture iconography and fan memory in SA. On South Flores, Chris Montoya's 2012 mural of Selena combines the singer's face and flowing hair with the patterns of Mexican serape blankets. "For Mexican-American kids, listening to Selena is a memory that almost everyone shares here," Montoya told the San Antonio Current. "Having that, I knew I needed something to tie in the community and have the community feel something for what I was gonna paint."

Ray Scarborough's work plays with the reverent theme more boldly, merging the Tejano queen with Cadillac grills, tattoo sleeves and other images of street art. "I grew up as a punk rocker, but in our household she was always around, whether my family was listening to her, or at parties," Scarborough remembered. "She was a part of the culture. And I like street art and graffiti art, so that's just what comes out naturally."

For Scarborough and his generation, Selena's pop also serves as a connection across the generational divide. "I grew up with a bunch of punk rock guys but whenever a Selena song came on, we'd lose our shit," he said. "It's a weird thing, but at the same time, it's what our grandmothers listened to and our parents loved. I listened to the Descendents and NOFX and stuff like that, and when Selena came on, my parents and my uncles, we would all dance and have a great time."

"The fact that she is Tejana, which is an American identity, is very important to point out," added Esparza, the veteran activist and movie producer. "She didn't speak Spanish. Her ancestors had been in Texas as long as Texas was Texas. She was projecting an American culture."

"It was very hard for a woman to make it into the Tejana scene and she totally did it and knocked down all these walls for female artists, even in rock scenes," said singer Nina Diaz. "She's right up there with Joan Jett or Billie Holiday. All these women that had things against them, whether it's color or race, they still did it in a masculine world."

Barely an adult, Selena had made immense strides — tidied up the rounded R's of her Texas accent to sing in Spanish, transformed a genre, opened a pair of clothing stores and married her love. But 20 years ago she lost so much more — film and hip-hop crossovers, building a family, career lulls and smash hit reunion tours.

In other words, a life. And Selena fans, holding onto a fond family memory or an eBay-bought tube of discontinued Chanel Brick lipstick, endlessly dream of what could have been.

And who could blame them. Dream on.