Aperture is unclassifiable but no sludge factory 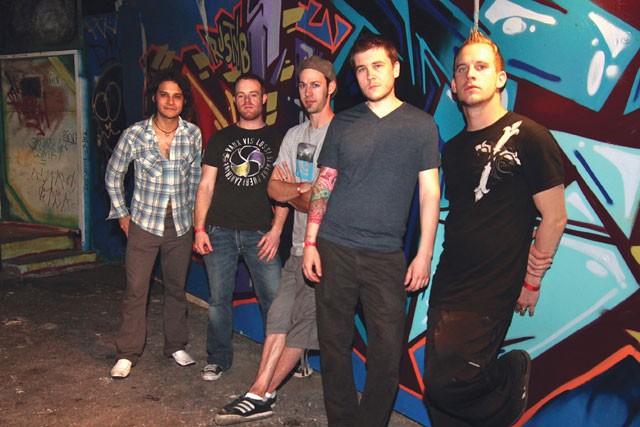 Aperture are playing their first headlining show at Jack’s Bar this Saturday. This isn’t necessarily the best situation to be in. The band’s bright-eyed singer/co-songwriter Nathan Alvarado, who recently shaved off his rock locks (and what looks like eight years), told the Current over a glass of vino at Josephine St. Café that “No one wants to play last” and that he finds the experience “nerve-wracking.”

He feels like he can’t relax during the opening acts. He’s afraid to talk loudly in a bar when he’s about to sing. And he won’t get too familiar with the bartender before taking the stage. That said, Alvarado is looking forward to using the extra stage time to unveil a new song and “some acoustic surprises.”

Headlining also offers a chance to see if they can carry a show. For that challenge, Alvarado says the crew is excited.

Alvarado, 34, is not new to the music scene. He fell into it on a friend’s recommendation in the early aughts and spent his late 20s singing in a variety of tribute bands. Coincidentally two of the bands — Third Eye (which covered Tool) and Light Grenades (Incubus) — came to define the grungy sound of Aperture, which he admits is difficult to describe.

While true Phil Spector fans will note that Aperture don’t layer piles of guitars recorded in an echo chamber, the band’s EP Now That You’re Awake certainly is loud and rockin’. On the title track, Alvarado’s vocals coil through a Layne Staley-style sing-chant over the murky guitar-crunch of Jared Mears and Michael Proctor. Drummer Justin Frary and bassist John Thevenot complete the arena-filling, turn-of-the-’90s rock sound of Aperture.

It’s heavy alright, but it soars as much as it stomps, escaping the trappings of heyday grunge.

While Aperture may still be coming to terms with what it is they’re writing, they’ve had no trouble barreling into the biz. Alvarado, a San Antonio resident, answered a Craigslist ad last December that involved him driving to meet the band in Austin. After a few beers, the band gave Alvarado some demo tapes and songwriting homework. He returned next practice with the first lyrics he had ever written, ready to jam — their first show was in February, after all. Aperture released their EP in April and, in the summer, they opened for Finnish neo-classical rockers Apocalyptica and Sulphur Springs’ Fair To Midland. The band counts the latter as a chief influence on their sound.

Aperture is also competing in a variety of music contests, including a chance to tour with Jane’s Addiction through Ourstage.com. At press time, voting had closed with Aperture placing eighth.

When asked if things seemed to be happening fast for Aperture, Alvarado cited the entire band’s “sense of urgency” and noted he’s glad he’s not the band’s “leader.”

“In all my previous projects, I was dragging guys along,” he said. “However, I don’t feel like I’m out on my own in Aperture. I feel I’m backing them.” •