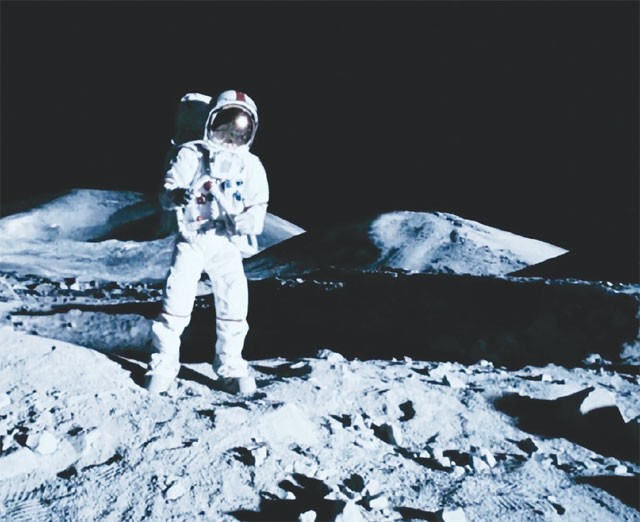 After refusing to screen the film for the press (a move usually reserved for studio execs who know they have a bomb on their hands) and delaying the release of Apollo 18 six times, Dimension Films’ head Bob Weinstein was quoted as saying “We didn’t shoot anything, we found it. Found, baby!” Ha-ha.

Apollo 18 is being marketed as “the truth” as to why we never went back to the moon. The film uses so-called found footage chronicling what supposedly happened to the last three astronauts to go up in 1974. For months and months, the names of the actors weren’t revealed because, you know, this is supposed to be real! These are not actors! And even now, only the names of two of the three actors are easy to find. Like we give a shit. Worse still: After the movie, the closing credits invite you to visit a website. If you’re that easy to manipulate, you get what you deserve. The site claims to have been “forcibly shut down.” How clever.

Any nefarious plots suggesting the use of the astronauts as guinea pigs, or claiming those rocks we brought were good for anything besides presents for foreign dignitaries, is barely touched upon. Instead, the movie relies on pure atmosphere and increasingly loud second-rate scare scenes in an attempt to try to keep you awake as time ticks by.

Then the movie is over. Just like that. After almost 90 minutes of cheap thrills you can see coming from clear across on the moon’s darker side, this bogus Alien-meets-The Blair Witch Project affair disappears from the screen and from memory faster than you can say “NASA.” Unlike the perfectly paced, genuine tension of Alien (where there is a reason and consequence for every turn), the “horror” in Apollo 18 is no more than a gratuitously claustrophobic succession of shocking gimmicks that were old — and better — in the ’80s.

Too bad, because the film’s visuals effectively recreate an updated version of the early days of the space program (at one point we hear Aqualung-era Jethro Tull, in case you forgot we’re talking about 1974) and the three actors (especially Lloyd Owen) do the best they can with lines like “There is something out there,” “Those Russians could be anywhere,” and “What was that?”

According to industry pre-release survey, Apollo 18 was probably going to earn the number one spot among releases of Labor Day, traditionally one of the slowest movie-going times of the year.

Allow me to give you a small piece of post-release advice: Don’t bother. •