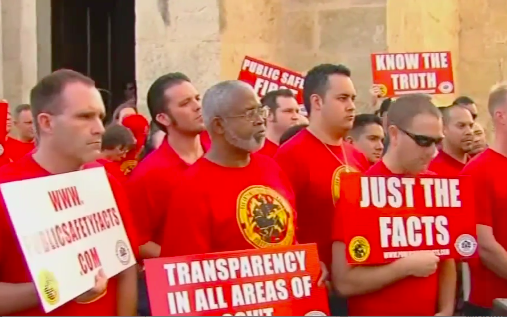 San Antonio has lost its lawsuit against the San Antonio Professional Firefighters Association for a clause in the union's contract that the city deems unconstitutional. Shortly after the Fourth Court of Appeals dropped its ruling Wednesday afternoon, Mayor Ron Nirenberg announced the city would be appealing the decision to the Texas Supreme Court.

"The city will and must — on behalf of our taxpayers — pursue this case to its conclusion," said Nirenberg in a press statement. "I am committed to ensuring that the city’s future contracts with public safety unions are legal, constitutional and fair to all involved. We will continue to work toward a swift resolution to these contract negotiations.”

This is only the latest news in the city's long-brewing battle with both its police and fire union contracts. The scuffle began in 2014, when the city refused to renew a police and fire contract without adjusting the unusually costly benefits package. The city and union leaders were still at a negotiation standstill when the five-year contract ended in October 2014. That's when the so-called "evergreen clause" entered the picture. It's a clause written into union contracts that allows union members to keep wages and benefits for up to 10 years during a collective bargaining standoff (like what was happening in San Antonio.) By November, the city had filed a lawsuit asking a judge to prove the constitutionality of such a clause. The city also sued the police and fire unions for allegedly using the financial cushion of  the evergreen clause to delay their own contract negotiations.

In 2016, the city bowed to the police union's pressure and approved a contract that shrunk the evergreen clause to eight years and included no reforms to the department's disciplinary process (it should be noted that then-councilman Ron Nirenberg voted against this). The lawsuit was dropped.

The city, however, has continued to fight against the fire union's contract and evergreen clause — arguing that the lofty financial promises included in the evergreen benefits package will drain the city's budget.

"We recognize and applaud the hard work of our firefighters, who risk their lives to keep our residents safe," Nirenberg said. "The evergreen clause, however, inhibits negotiations for new agreements and forces the city to provide benefits that threaten to overwhelm the city budget. This restricts our ability to provide other important city services."

The SAPFA released its own response to the ruling, claiming it's "willing to meet the city more than halfway" on contract negotiations. But the union refuses to meet with the city until they drop the lawsuit.

Councilman Greg Brockhouse, who was elected in June with strong support of SAPFA, echoed the union's stance. "The city... has wasted almost a million taxpayer dollars," he said in a press statement. "Call for the dismissal of the lawsuit."